Review: "Encounters at the End of the World" 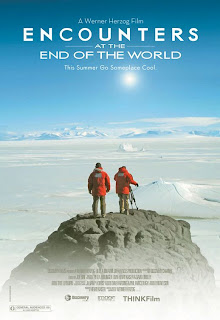 It may be a release of the theatrical wing of the Discovery Channel, but Werner Herzog's Encounters at the End of the World is anything but your run-of-the-mill nature doc.

Of course, Herzog has never been one to do things the conventional way. Having most recently set his sights on man meeting nature in the fascinating Grizzly Man, Herzog now sets his sights on the vast, mostly unexplored frozen wilderness of Antarctica. But he isn't interested in making another "film about penguins," as he jokingly insists at one point. He has far bigger, and more probing, questions on his mind.

Penguins do, eventually, figure into the picture. But Herzog has no interest in covering ground already explored in March of the Penguins, he's more interested in asking about gay penguins, insanity, and penguin prostitution. Sometimes Herzog works in mysterious ways.

But his unusual curiosity and singular way of viewing the world are only part of this breathtaking journey into the unknown. Flying down to Antarctica with a group of scientists, Herzog lands at McMurdo station, a virtual city on the ice, home to researchers and scientists from all over. It is clear that Herzog finds an immediate connection with these people - explorers and wanderers whose dreams of something beyond their world have brought them to the bottom of the world. Free from their worldly status, these learned people drive trucks and heavy machinery, all doing their part in a frozen commune where ideas are freely shared and something new is discovered every day. 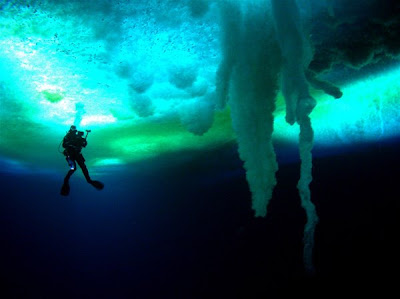 McMurdo is, in a very real sense, its own little world; its citizens becoming philosophers and dreamers who are living out a great fantasy. These are the people who populate this wondrous world that Herzog as captured with clear eyed awe. His capturing of Antarctica's natural wonders have an almost religious reverence to them, so much so that diving beneath the ice is referred to as "going down to the cathedral." And indeed, the icy ceiling feels like the Sistine Chapel of nature's glorious temple.

Herzog's camera captures they sweeping beauty of Antarctica in ways that we have never seen before. And while the musings of the few people who populate it are interesting in and off themselves, the real heart and soul of the film is nature itself. Herzog fashions them into a mesmerizing journey to the edge of the earth and beyond, and his inquisitive narration offers a unique perspective into not only human nature, but the source of life itself. 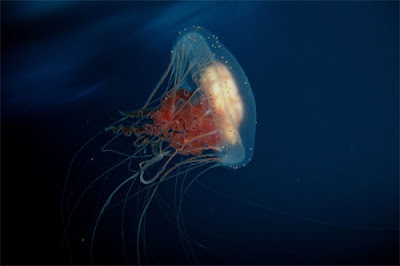 I am not a religious person myself, but one can almost feel an element of the divine in Encounters at the End of the World, inasmuch as "god" is a human projection of the awesome wonders of nature. Herzog follows creatures that seem alien on our own planet, and Antarctica is another world frozen in another time and place. He opens up a window into a new universe that is at once enthralling and humbling.

The people at McMurdo Station see humanity as just another blip on the radar of the evolution of our planet, and seeing the vast sea of creatures that share this world with is is enough to give anyone pause. We are just another link in the chain, comfortable in our own perceived dominance, while the real rulers of the planet live in beautiful caverns and seas beneath our feet. We are surrounded and outnumbered, with the comfort to know that we live amongst such great beauty. Encounters at the End of the World is a minor miracle of a movie, one that dares, even for an instant, to reach out and touch the face of god.

ENCOUNTERS AT THE END OF THE WORLD; Directed by Werner Herzog; Rated G; Now available on DVD.

Anonymous said…
I share your enthusiasm for this Matt, and you seem to have captures the otherworldly wonders of this most special documentary, yet another Herzog gem.
6:22 PM

Anonymous said…
I agree, it was really beautiful.
11:20 PM