Will Smith at the Premiere of "Seven Pounds" 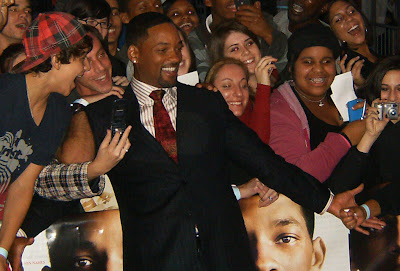 Last Thursday I had the opportunity to attend the red carpet premiere of Seven Pounds in Charlotte, which was held as a charity fund raiser for the Second Harvest Food Bank. And I have to admit it was a bit of a surreal experience. It still doesn't quite feel like it actually happened to me.

I was led down the red carpet by a publicist in front of the anxious crowd waiting behind the rails for a glimpse of Smith himself, or Carolina Panthers quarterback Steve Smith, or any number of VIPs or dignitaries who were present, which also included Charlotte mayor and recently failed Republican gubernatorial candidate, Pat McCrory. 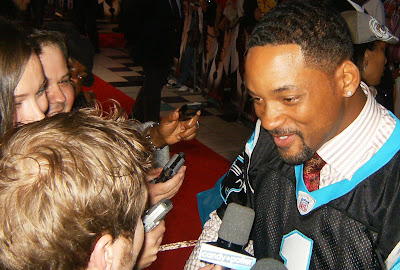 I was stationed at the end of the red carpet with the rest of the print critics, behind the TV cameras and radio personalities clamoring to get face time with one of the world's biggest movie stars. The tension was palpable, the crowd was restless, and the theater lobby was stiflingly hot. The carpet stretched outside along a path of screaming fans. It would take him forever to get inside. 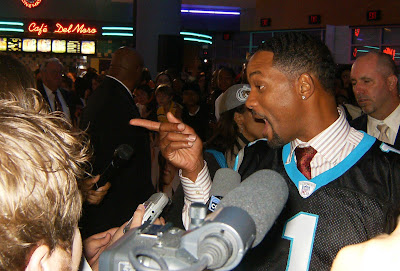 We didn't have to wait for the announcement to know he was there. The roar was deafening - people shouting and screaming, almost jumping over one another to try to get at Will, who smiled and waved at the crowd, signing autographs and holding babies. But the real roar was when he took the stage with the Panthers for a special presentation of 300 turkeys to the food bank, and was given a Panthers jersey with "W. Smith" printed on the back. He later pulled the jersey off and handed it to a little girl in the crowd. 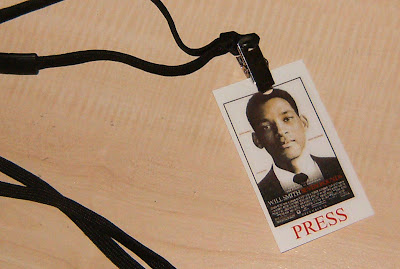 I never actually got to talk to him, he was being pulled along by frantic publicists who were already running 30 minutes behind schedule, and Smith was more interested in greeting fans than giving interviews, which is commendable. I did get plenty of pictures and video (although my Flip camera's sound isn't the best, so I'll spare you the upload), and lots of memories. It was an experience this fledgling young critic won't forget anytime soon.
Email Post

Anonymous said…
Congratulations Matt on this thrilling experience! Your report is thorough and suffused with passion and excitement.
8:08 AM

Daniel said…
The pics look great anyway, nice job getting into this one!
6:22 PM