Review: "I've Loved You So Long" 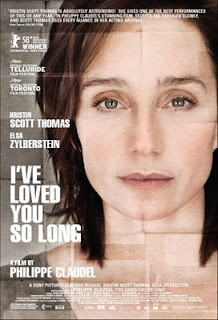 In Philippe Claudel's alternately bleak and hopeful I've Loved You So Long, Kristen Scott Thomas delivers what is quite possibly the best performance in her distinguished career.

As former doctor Juliette Fontaine, just being released from prison after 15 years for the murder of her six year old son, Thomas is a haunted shell of a woman, so withdrawn that many of the inmates referred to her as "the absent one." And in fact she does seem to be a woman not even present in her own body, always somewhere else far away, lost in a life that once was and can never be again.

In fact, Thomas is so withdrawn that she almost seems gray; pasty from 15 years out of the sun and nearly ghost-like, the shadow of a person long gone.

Moving back in with her sister, Léa, and her husband, Luc, and their two children, Juliette struggles to rebuild her life after spending 15 years in prison. Her family has long since forgotten her, instructing the then teenage Léa that her sister no longer existed and to never speak of her again.

But Léa clung to her sister's memory all those years, and is thrilled to have the chance to reconnect with the long lost figure from her childhood. But the transition isn't easy for Juliette, who must not only deal with the prejudice of the outside world and the lingering animosity in her senile mother, but the family's constant attempt to gloss over her whereabouts for the last 15 years to curious friends and colleagues who thought Léa was an only child. 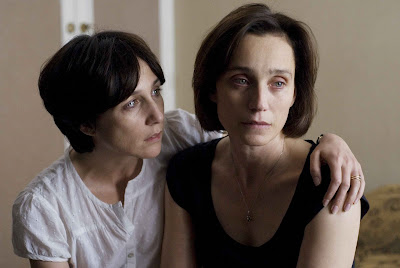 But Juliette must also come to terms with her crime. And while Luc doesn't trust her to be alone with his young daughters, Juliette begins to form a bond with eight year old P'tit Lys, and the film builds toward a shattering conclusion where the nature and motivation of her crime is finally revealed.

Much of the praise surrounding the film surrounds Thomas' ethereal performance, and deservedly so. She is brilliant, toning down her inherent regal air and sucking the life out of her very skin. It is a heartbreaking performance, utterly vulnerable and completely real, a woman who seems vacant in her own body yet somehow finds a way to gradually come back, and you can see it in her eyes, as they go from lifeless to soulful by the film's emotionally cathartic denouement.

Thomas, however, is not the only actor deserving of praise her. Elsa Zylberstein as Léa more than holds her own. Hers is almost childlike performance, as if Léa were somehow a little girl who has just discovered that her imaginary friend is real. Léa has spent most of her formative years being brainwashed by her parents that Juliette no longer exists. But deep down she kept hope alive for the big sister that she idolized, and to see her again and to transfer that love to something tangible, is a dream come true for her. Zylberstein brings a wounded innocence to the character, jaded by force but innocent of mind, believing in Juliette when no one else will, and providing a sense of stability to balance out Juliette's emotional volatility. 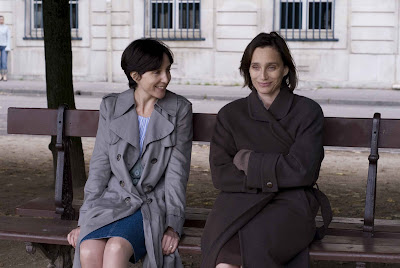 The script by writer/director Claudel is first rate, and is probably one of the definitive examinations of an inmate's life after incarceration. Juliette must not only deal with reintegrating with society; finding a job and a place to live, she has to reconnect to people she hasn't seen in years, who look at her and see a woman who killed her son rather than a human being like anyone else. Claudel handles the tough subject matter with a delicate but unflinching eye. He forces us to see Juliette as a person, not a monster, and creates a remarkable character study while guiding two stellar actresses to some of the finest performances of the year.

It is not an easy film. Claudel puts the audience through an emotional wringer, but he manages to find hope in a seemingly hopeless situation. Where a woman haunted by an unthinkable crime finds redemption in a sister she thought she'd lost, and a niece who fills a deep void her son once occupied. I've Loved You So Long is a remarkable film marked by remarkable performances that stand strong among the year's finest, and Claudel deserves credit for crafting an elegant and moving drama that strikes a pitch perfect balance between sentiment and hard reality.

For all its strife and despair, I've Loved You So Long strikes a resonant, humanistic chord that is nearly impossible to shake.

Anonymous said…
Yet again I agree with your dead-on estimation of this film, and the fact that Kristin-Scott Thomas has never been better. Outstanding film criticism of a film that warrants everyone's attention, and one that moved me as well.
11:47 AM

mB said…
It is quite a remarkable film and I'm glad your review spreads the wealth and doesn't just fixate on the remarkable performance by Ms Scott-Thomas and really give credit to all involved.
9:53 PM