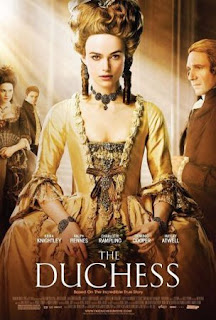 After watching quite a few period pieces about the lives of historic, royal figures, you begin to feel like you've seen it all before. Already this year we've had The Other Boleyn Girl, The Duchess of Langeais, and The Last Mistress, and now Saul Dibb's The Duchess, which has the unfortunate position of coming last.

There's a definite sense of deja vu going here. The Duchess has a very familiar construct and even more familiar execution. It fits its purpose and genre to a "t," down to the elaborate costumes and period settings.

However, despite its rather conventional structure, The Duchess manages to succeed where others have failed trough excellent performances and stellar production values. It never feels turgid or forced the way many films of the kind tend to do. And it's mostly thanks to the performance of Keira Knightley in the title role of Georgiana, the Duchess of Devonshire. 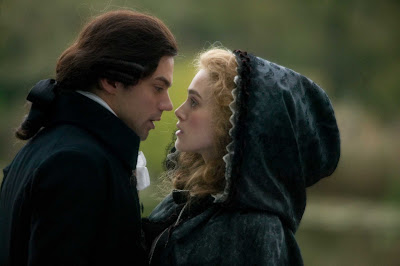 Stuck in an arranged marriage with the Duke of Devonshire (the Golden Globe nominated Ralph Fiennes), the strong willed Georgiana finds herself unable to produce the desired male heir and that her life, while surrounded by the glamor of being a popular socialite, is missing that certain spark. She becomes even more convinced of this when her best friend, Bess Foster (Hayley Atwell), becomes involved with the Duke, creating what is essentially a three way marriage.

Although she is distraught at first, Georgiana learns to live with the new arrangement, and begins to find her own happiness when she falls for the young political idealist, Charles Grey (Dominic Cooper). But once the Duke gets wind of her dalliances, and the people begin to gossip, the tide of Georgiana's life begins to turn, and she is forced to make impossible decisions to protect her future and the future of those she loves. 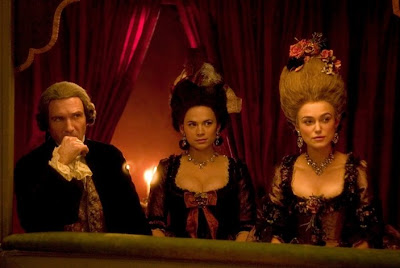 Unlike the cold and uninvolving The Other Boleyn Girl, The Duchess is a much more emotionally accessible film, and I think most of the credit belongs to Knightley. Although Fiennes does quite an admirable job with a difficult character, turning what is essentially a deeply unlikable man and giving him a duality that is refreshing to watch. There is a kinder nature beneath the hardened exterior, and when Fiennes allows that man to peep out, the film really opens up.

That is the problem with many period pieces, they are as stiff and closed off as the corsets that imprison their women. But Dibb never overwhelms the emotions with overwrought speeches or gaudy costumes, or boggs them down with unnecessary soap opera histrionics. He turns what would otherwise have been just another costume drama into something solid and watchable. The Duchess is by no means a classic, but it delivers on what it sets out to achieve, and manages to rise above the constraints of its genre. And in a film like this, that is a welcome thing indeed.

Anonymous said…
Fair enough review here Matthew, pointing out the inherent difficulty with period drama in general. I admit I liked this film a bit more than you, and it will probably make my "runner-up" 10, but I can well understand the modest disclaimers. Beautifully-written, as always.
11:14 AM

Jess said…
I liked it too, much better than The Other Boleyn Girl, and better than many of the other period dramas. It showed a woman of substance trying to find her way through a society that didn't quite work out the way she expected.
2:15 PM