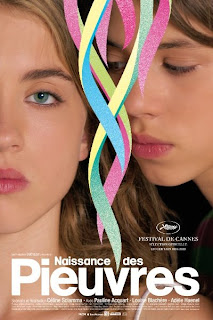 Teenage sexual awakening and self discovery has long been a favorite topic of filmmakers throughout the last century. You could say we've seen it all before, and in many ways we have. But seldom do we see it done as beautifully or as lyrically as in Celine Sciamma's debut feature, Water Lilies.

The film centers around three 15 year old girls, Marie, Anne, and Floriane. Marie (Pauline Acquart) is a shy, awkward tomboy who dreams of becoming a synchronized swimmer. Her best friend Anne (Louise Blachere) is a synchronized swimmer, but she is also overweight and painfully self-conscious about her body. So much so that she refuses to change out of her bathing suit until everyone has left the locker room. And Floriane (Adele Haenel) is the star of the swim team, a beautiful bad girl that all the girls hate and all the boys want. Or at least that's what she wants everyone to think.

As Anne begins to fall for Floriane's boyfriend, Francois (Warren Jacquin) in ways that begin to border on obsessive, Marie and Floriane strike up an unusual friendship that soon turns into a budding romance of unspoken desires.

Water Lilies is a film filled with adolescent angst and longing as each struggles with their own sexuality. Anne must overcome her own self image, Floriane strives to keep up the image of herself she has created, and Marie is struggling with feelings she never knew she had for the first time. 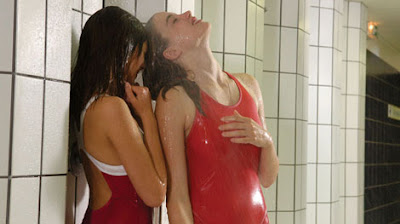 It is a potent and at times powerful examination of adolescent sexuality, infused with a haunting melancholy reminiscent of the films of Sofia Coppola. I can't think of a film I have more singularly identified with this year than Water Lilies. I felt like I was on the verge of tears for the entire film. Marie's deep seeded longing is by far the film's strongest part. Floriane's posing was maddening not just for Marie but for the audience as well. But it's painfully realistic, like most of the film. Floriane is determined to keep up her slutty reputation no matter what, even at the expense of Marie, and in turn her own lesbian desires.

Floriane is the film's most enigmatic character, with the most ambiguous sexuality. But at 15, she is still trying to discover herself, as are they all. And anyone who has been a teenager in recent years will most likely recognize parts of themselves in one or all of the characters. 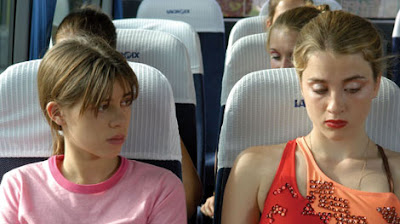 For me it was Marie. She is the film's heart and soul, her longing becomes our longing, and Sciamma does a masterful job of putting the audience in her shoes. She is experiencing love for the first time, falling head over heels for Floriane but having no idea what to do with these feelings that until now have been foreign to her.

Even Anne, whose attempts to be noticed by the popular Francois grow more painful and pathetic as the movie progresses, seems wholly real. These are real, living, breathing teenagers. So few films ever capture the teenage experience so keenly.

Needless to say I loved this film. Water Lilies moved me in a profound way that very few other movies this year have. The only other one to really hit me like this was Lucia Puenzo's XXY, another film about teenagers struggling with their sexuality. Both films take unique looks at familiar themes, displaying a potent insight into teenage sexuality, unspoken desires, and unrequited love.

This is what it's like to be a teenager, relived all over again.

You're going to just have to start going by the motto of "see everything" then you won't be kicking yourself months later. ;-)
12:24 AM