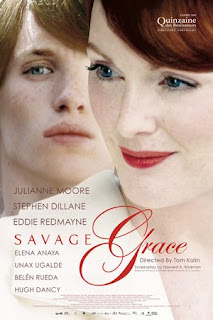 The thought that kept crossing my mind as I watched Tom Kalin's Savage Grace was "how did so many talented people go so horribly, horribly wrong?"

That's right. Savage Grace is an unqualified train wreck, a mess from start to finish. And it's not even the kind of train wreck that you can't look away from, it's just plain unbearable.

The subject matter is unpleasant, but that isn't really the problem. It just could have been handled in a much better way. Based on a true story, Savage Grace is a dramatization of the infamous case of Barbara Baekeland (Julianne Moore), a wealthy socialite whose relationship with her son descended into madness, incest, and murder.

There is plenty of material there just begging for a good movie, but Savage Grace isn't it. Not by a long shot.

The film takes place over a period of nearly 30 years, but the characters never age. This is not a problem so much for Barbara's son, Tony, who is played by 3 different actors, but Barbara never changes. 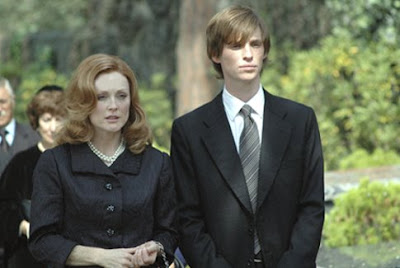 This would not be such an issue if the movie bothered to develop its characters. But it never does. They're all just crazy. Howard A. Rodman's screenplay never gives the characters any depth or motivation or anything resembling development or three dimensional personalities. They're all just a collection of neuroses and selfishness. They are caricatures, especially Moore's Barbara. But the fault doesn't lie with her so much as the script, which doesn't do anyone any favors.

The film looks good, and has an overall air of quality about it, but that makes its complete lack of quality even more shocking. If this were say, Prom Night, this would be expected. But it isn't. And it's still unwatchable. It's the potential for quality that makes this one such a great travesty. 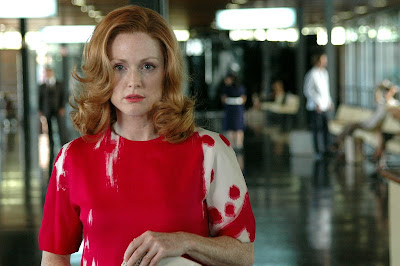 Try as I might I could find nothing redeeming about this film. The only really positive thing I can say about it is that I think Eddie Redmayne is becoming a real talent to watch. He has had memorable supporting roles in Elizabeth: The Golden Age and The Other Boleyn Girl, and finally gets to spread his wings a little in a meatier role. Too bad it's in such a terrible movie.

Anonymous said…
Great review, I remember you saying how awful this film was, and I sort of get why - having never seen it before, and there is a good chance I never will, your word is all I am going on.
9:32 AM

This is definitely one you should run screaming in the other direction from.
3:21 PM

Daniel said…
Wow. There's now way I would have seen this as I'm allergic to Julianne Moore, but I thought this was being talked about for early Oscar buzz. Glad to hear it's not.
5:23 PM