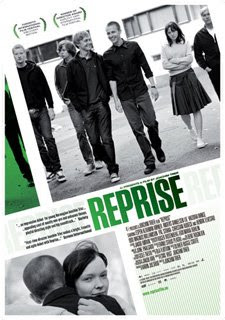 “I wanted to make a film that focused on the poetic details of boy culture,” Norwegian director Joachim Trier said in a recent interview with the New York Times, “a bit like what Sofia Coppola did for girl culture in The Virgin Suicides. ”

In his astonishing film debut, Reprise, Trier does just that.

The film centers around two best friends, Phillip (Anders Danielson Lie) and Erik (Espen Klouman-Høiner); both aspiring writers who are trying to navigate the increasingly complex waters of early adulthood. Phillip finds a measure of early success, but then finds himself crippled by writers' block, and an obsessive love that triggers a relapse of his psychosis. Erik's manuscript is rejected at first, but later the tables are turned and it is Erik who becomes the successful one, but it is at the expense of his own personal life.

Trier directs with an energy and verve reminiscent of the early works of Francois Truffaut and Jean-Luc Godard (a comparison made even more blatant by the striking resemblance of Victoria Winge as Phillip's girlfriend Kari to frequent Godard collaborator Anna Karina). His keen insight into the male psyche is extremely potent. The circle of friends that form the story's core are full of macho bravado, sinewy bundles of testosterone with nowhere to go. Their energies and frustrations are expressed as childish immaturities that mask unspoken pains and wounds that society forbids them to express. These boys don't cry...at least on the outside. 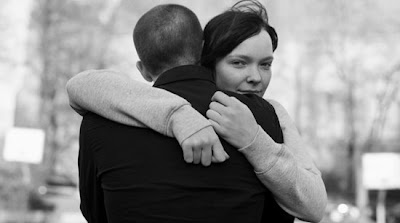 That is Trier's most profound statement in Reprise. These boys are products of masculine expectations that pigeonhole them into preconceived notions of masculinity, producing insecure boys in the bodies of men, trapped in a state of flux after childhood but before adulthood. They are lost, adrift, in a real world they're not quite ready to accept, which may not be ready to accept them anyway.

It is these in-between places that seem to fascinate Trier the most. I love the fact that in many of the one-on-one dialogue scenes, Trier allows the words to continue, but the camera lingers on the in-between moments, the glances, the stares, the faraway looks. We still hear the words, but the lips have ceased to move, the camera has stopped to watch a moment that would have otherwise passed by unnoticed. He forces us to observe the moments most never pay attention to, the small, seemingly inconsequential moments where things left unsaid suddenly come bubbling to the surface.

And there is plenty left unspoken in Reprise. In fact, much time is spent imagining alternate, more positive realities for the characters that will never come true, but might have under the right circumstances. Maybe its the way things should have turned out. But real life isn't like that, and neither is Reprise.

It is a vibrant, ethereal look at male relationships that goes where few films dare to go. It punctures the bravado and looks at the boyish soul underneath, painting realistic portraits of love, ambition, and friendship. It loses some steam in the middle stretch, which keeps it from getting perfect marks, but picks it again near the end, making it a near masterpiece on the very first try.

Joachim Trier is an exciting new talent, whose style seems both thrillingly fresh and refreshingly old school. It is obvious he learned much from the French New Wave, but true to the spirit of the original Cahier du Cinema critics, Reprise embraces the old while forging brave new trails in the art form. This is filmmaking as it should be.

Anonymous said…
Sounds like a film I would enjoy, if I enjoy it as much as I enjoyed reading your review, that is.
9:32 AM

Curiousityloko said…
" He forces us to observe the moments most never pay attention to, the small, seemingly inconsequential moments where things left unsaid suddenly come bubbling to the surface."

And that is my favorite thing about film. Great review. Hope it opens to a wider audience soon.
9:36 AM

Matthew Lucas said…
Nick, you're going to love this. I kept thinking about that the whole time I was watching it. I hope you get to see it soon.
10:46 PM