Review: "The Children of Huang Shi" 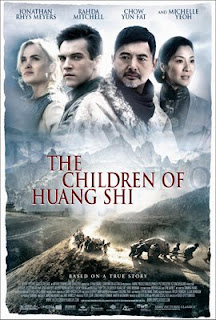 I'm not quite sure what in the career of Roger Spottiswoode gave anybody the impression he had a sweeping historical drama in him. When your highest profile films have been Turner & Hooch, Air America, Stop! Or My Mom Will Shoot, Tomorrow Never Dies, and The Sixth Day, there seems to be no indication that a film of this magnitude is in his capability.

And ultimately, it isn't, because The Children of Huang Shi is a miserable failure. All the ingredients are here for a fantastic film, but they all fall woefully short.

It's a true story just begging for a great film to made about it. George Hogg (Jonathan Rhys-Meyers) was a British journalist covering the Japanese occupation of China in the days before World War II. Desperate to cover the story from behind enemy lines, he sneaks a Red Cross pass and travels to a ruined city where he witnesses the mass murder of innocent Chinese civilians, and is captured by Japanese forces. But he is rescued by Chen Hansheng (Chow Yun-Fat), a Communist resistance fighter, who sends him to Huang Shi to learn Chinese before continuing his journey. However, when he arrives, he discovers that he has been sent to a refuge for war orphans, where a courageous Australian nurse named Lee Pearson (Radha Mitchell) leaves him in charge while she leaves for more supplies. There, George forgets all about his original quest for the ultimate story, and devotes his life to protecting and educating the children, and eventually taking them on a perilous thousand mile journey through the snowy mountains to save them from the advancing Japanese onslaught. 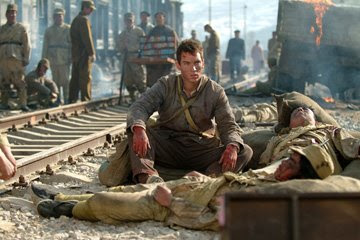 It sounds fantastic. But Spottiswoode's weak direction and awkward pacing all but sink the film. The one-dimensional characters are given little to no motivation, situations little to no set up or explanation, and seemingly important events just happen out of nowhere with no rhyme or reason. Add that to an atrocious script, and you have a recipe for disaster.

Spottiswoode's penchant for overripe melodrama is also a major issue. The film is absolutely swimming in unintentionally hilarious moments due to its self serious nature and soap-opera like leanings.

The acting is also surprisingly lackluster for such a talented cast. The only one who doesn't seem totally bored is Michelle Yeoh, who is a regal presence as always as Mrs. Wang, an aristocratic merchant who helps George feed the children. It is clear that Spottiswoode is not a very strong actor's director, and the entire film suffers from a lack of fire and passion, especially on the part of the actors. 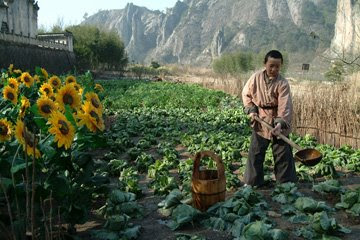 The film is beautiful to look at however, thanks to the gorgeous cinematography of Xiaoding Zhao (House of Flying Daggers), and David Hirschfelder's score is also very nice. The Children of Huang Shi may have the look of quality, but it has none of the feeling. The entire thing feels inept, like a great film in the hands of an amateur, totally fumbled and lacking all the qualities of a great film. This is paint-by-numbers Picasso.

There is a wonderful film in here somewhere, but Spottiswoode is totally out of his element here. In the hands of a better director more suited for this type of film, The Children of Huang Shi could have easily been one of the year's best films. As it stands, it is an awkward, stilted mess that is a chore to watch. This was a major wasted opportunity.

Anonymous said…
Sorry to hear this one is awful, it was on my list of things I eventually wanted to see, but not any more.

"The film is beautiful to look at however," I am surprised at how many films can be BAD and still look AMAZING. Like most historical soap operas...I guess it is the only compliment we can give many films - but the look great - but like you say, sometimes {meaning most times} it takes a hell of a lot more.

Good review, and thanks for taking the bullet.
9:54 AM