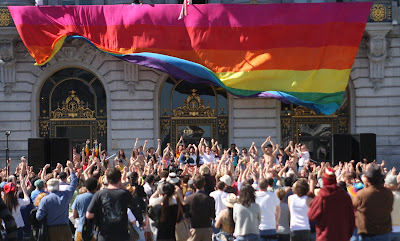 The New York Times' Manohla Dargis, probably the contemporary critic whose work I most respect, said this in her year end write-up about Gus Van Sant's Milk:

Mr. Van Sant’s other film, of course, is “Milk,” a touching if aesthetically unremarkable biography of Harvey Milk, the assassinated gay rights pioneer. I like “Milk,” which has a strong, showy, often moving performance from Sean Penn as Milk and one gorgeously directed and choreographed sequence — shot by the great cinematographer Harris Savides — in which Josh Brolin, oiled in flop sweat and hair grease as Milk’s killer, Dan White, walks alone through a series of grim institutional corridors that put the killer’s existential isolation and desperate journey into bold visual terms. “Milk” is undeniably moving, but it earns most of its power from its historical resonance and because it holds up a mirror to another charismatic community organizer who rose from the streets on a message of hope.

I don't think I have heard anyone put it better. Milk is a fine film, and a very moving one, but it just misses its shot at greatness by being, quite honestly, just another biopic with a great story. It is well told, and well performed, and socially relevant, but artistically unremarkable.

Her top ten list is also one of the best around:
Kudos to Dargis on an insightful wrap-up for the year that was 2008.
Email Post

Anonymous said…
I think my top ten list will mirror hers closely, which makes me feel happy inside, lol.
8:47 AM

Anonymous said…
It sounds to me like you are using Manohla's opinion to back up your lack of judgement as to why you dislike Milk. Would have thought a fag like you woulda loved it, or, in the very least, I thought you would have explained why exactly you didn't like it better than in your review.
9:20 AM

Matthew Lucas said…
Dave, one would think a bigot like you wouldn't care if someone disliked the film. Although if you were more intelligent, you would have noticed that I liked the film quite a bit, I just didn't love it. But I've learned never to expect too much intellectual insight from a homophobe.

Dargis is a critic I have great respect for, and have no problem sharing her opinion if I find it particularly incisive.
10:30 AM

Anonymous said…
I'm no bigot love, I'm a fag myself - and I loved Milk, but I think you are too quick to "share" a major film critic or voice's opinion - be it Jeff Wells or Dargis - as a way to back up your own thoughts because you don't seem to think they alone suffice.
11:34 AM

Matthew Lucas said…
I have absolutely no qualms about sharing the opinions of an established critic I respect like Dargis if I find them particularly eloquent about a film I admire.

I am confident enough in myself to know when someone has said something better than I could have, and I always appreciate it when another critic helps me see something in a new or different light.

That is, I think, the whole point of film criticism in the first place.
12:55 PM

Anonymous said…
Dave: I disagree with you. I often do the same thing. I have never seen Matt at this site compromise his opinion because he was impressed with someone else's review. To my eyes Matt gave MILK an excellent review--it may not make his ten best list--but it was an excellent review nonetheless. And I happen to agree with him completely on Ms. Dargis, who is the finest critic an dwriter working today. There are some minor issues in MILK--like the inability or unwilingness to examine MILK in a psychological sense, but as he was more of a "symbol' in this film, I didn't take major issue.
Matt was doing this site and film lovers in general a great service by bringing in Ms. Dargis's perceptive review.
1:21 PM