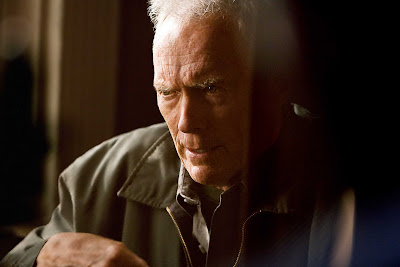 You'll forgive me for posting another Dargis quote I'm sure, but her analysis of Clint Eastwood's surly, poignant Gran Torino has perfectly captured what makes this film so special:

These spectral figures, totems of masculinity and mementos from a heroic cinematic age, are what make this unassuming film — small in scale if not in the scope of its ideas — more than just a vendetta flick or an entertainment about a crazy coot and the exotic strangers next door. As the story unfolds and the gangbangers return and Walt reaches for his gun, the film moves from comedy into drama and then tragedy and then into something completely unexpected. We’ve seen this western before, though not quite. Because this isn’t John Wayne near the end of the 20th century, but Clint Eastwood at the start of the still-new 21st, remaking the image of the hero for one more and perhaps final time, one generation of Americans making way for the next.

That probably sounds heavier than I mean, but “Gran Torino” doesn’t go down lightly. Despite all the jokes — the scenes of Walt lighting up at female flattery and scrambling for Hmong delicacies — the film has the feel of a requiem. Melancholy is etched in every long shot of Detroit’s decimated, emptied streets and in the faces of those who remain to still walk in them. Made in the 1960s and ’70s, the Gran Torino was never a great symbol of American automotive might, which makes Walt’s love for the car more poignant. It was made by an industry that now barely makes cars, in a city that hardly works, in a country that too often has felt recently as if it can’t do anything right anymore except, every so often, make a movie like this one.

Gran Torino is a sort of throwback, and Eastwood's Walt is a kind of symbol for a bygone era in America. He's tough, prejudiced, and set in his ways, but ultimately not beyond redemption. Coming at the end of the Bush era and the still uncertain but hopeful dawn of Obama, Gran Torino represents not just potentially "fascist" (as Pauline Kael once called Dirty Harry) Hollywood iconography, but something much larger than itself, probably even more so than it realizes. It is an elegy for a country looking for atonement after losing its way in macho xenophobia. Walt's may be a dying way of life, and the gang an even more passe trapping of unbridled machismo, but it is segueing into something new, keeping traditions while stepping timidly into the 21st century.

Dirty Harry was an ideal for an America that no longer exists, and Gran Torino offers hope for a future for a country lost and looking for absolution.
Email Post

Anonymous said…
I DON'T UNDERSTAND A FUCKING THING YOU SAID, MR DUMBFUCK METAPHORIC IDIOT OF ANALOGY. I THOUGHT THE MOVIE WAS GOOD, AND I THINK YOU ARE A DUMB-ASS...SIMPLE AS THAT...
IT'S CALLED PLAIN ENGLISH, OR BEING STRAIGHT FORWARD...I BET YOU DON'T EVEN KNOW WHAT THAT MEANS DO YOU.
THE ONLY REASON I'M ANONYMOUS IS BECAUSE I DON'T FEEL LIKE SIGNING UP AND LOGGING ON AND ALL THAT OTHER WEB SITE BULLSHIT...
3:04 AM

No, the only reason you're anonymous is because you're a cowardly troll.

You don't understand metaphor...and yet I'M the dumbass?