Michael Haneke's Funny Games will be released in theaters this Friday, and already the critical reactions have been extremely divided, with many crying "brilliant" while the others gather up their moral umbrage.

I have yet to see the shot-for shot remake, but I have seen the original, and I agree that it is one of the sickest, most vile films I have ever seen (click here to read my review). But one cannot deny its skill and sense of purpose, no matter how disturbing it may be. 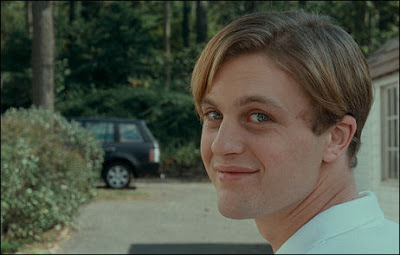 Jeffrey Wells spends several posts in a row over at his newly designed Hollwood-Elsewhere blog (which looks good, by the way) decrying the film, then later claims to "respect it for what it is." But how can one do that while singing the praises of quotes like this one from New Yorker critic Anthony Lane, who somehow manages to state the point and yet miss it completely in his ignoring of (or perhaps ignorance of?) the Brechtian theory of verfremdungseffekt:

If this movie knows it’s merely a movie, and concedes as much, why should we honor its mayhem with any genuine fright? When Michael Pitt turns to the camera and asks, with a smile, “You really think it’s enough?,” or “You want a proper ending, don’t you?,” we don’t feel nearly as chastened or ashamed as Haneke would like. We feel patronized, which is one of the worst moods that can beset an audience. Would “Psycho” have been a more profound film if Norman Bates had turned off the shower halfway through, adjusted his dress, and said to us, “Don’t worry about the blood. It’s chocolate sauce”?

Of course that wouldn't have worked for Psycho - Hitchcock was not trying to make an alienating film techniques that were espoused by German playwright Bertolt Brecht, who said if you remind the audience that what they are watching is a play (or a film), and keep them from losing themselves in the world of the play, then they cannot miss the message and forget the troubles of the world around them.

THAT is what Haneke is trying to do here, and if you miss that then you miss the point entirely. I find it hard to believe that Lane, as film critic for the New Yorker, has never heard of Brecht or his theories (as a theatre/film student, I never hear the end of him), but to totally ignore him in his review of Funny Games seems almost like dereliction of duty. Even more surprising is he doesn't seem to understand the alienation effect or its purpose.

Wells at least admits to respecting the film, but then faults Warner Brothers for distributing it and saying if he was in charge it he never would have approved it (why? Kudos to Warner for taking a ballsy chance). But he also subscribes to this aversion to breaking the fourth wall, and yet again never once mentions Brecht.

You cannot unlock Funny Games without first understanding Brecht and what he was trying to do (I was in a production of a Brecht play a couple of years ago, and trust me it isn't easy).

It just suprises me how few critics are mentioning this, and condemning it without ever really exploring its roots.
Email Post