Having suffered through the truly dreadful 10,000 B.C. yesterday I thought I would offer some constructive criticism outside of my official review (which will be published in The Dispatch on Thursday) on how it could have been done better:

1. No dialogue. Cavemen in 10,000 B.C. would have barely had a language, let alone English. How much cooler would this movie have been totally without dialogue (the script was so bad they could have thrown it out and been fine anyway), and let the story speak for itself through images - to really give the feeling of what 10,000 B.C. was like. Now that would be worth seeing.

2. Hire a different director. Roland Emmerich has proved himself totally incapable of directing an intelligent movie. I loved Independence Day, and The Patriot wasn't bad (but a little cartoonish), but there is no excuse for the moronic Godzilla and The Day After Tomorrow. 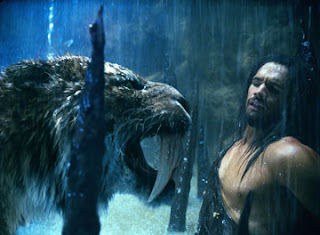 4. Hire a historical consultant. The use of swords was bad enough - but woolly mammoths helped build the pyramids??

5. Find better actors. What happened to Camilla Bell? She was great in The Ballad of Jack and Rose, but now she does movies like this and When a Stranger Calls. Maybe they should hire someone who can actually, you know, act.

6. Dispense with the narration. The dialogue was bad enough (especially that romantic pap near the beginning about being "like a star in my heart"), but the narration was grating and unnecessary.

7. Spend more time perfecting the special effects. Some of it looked great, but some, especially early close-ups of the men running alongside the mammoths, are painfully obvious that they're greenscreen shots.

8. Throw out Joseph Campbell's Hero with a Thousand Faces. And do something completely original. I know Campbell says every heroic myth follows the same basic structure, but damn it's almost like you just gave up and followed the book's Cliff's Notes.

J.D. said…
YES, mostly. I don't think they were trying to make something that was supposed to be literal... well, I hope they weren't, because in that case, they're terrible idiots. Uh... you know what I mean. ;)

The wide-shot VFXs were great, especially of the pyramid city thing, but you're absolutely right about the mammoth hunt.

Camilla Belle's eyes -- however little sense they made in the film -- made me forget every now and then how bad a movie it is.

And, um... the narrator was OMAR SHARIF. WTF?