Ready for Another Dose of Star Wars?

George Lucas recently gave theater owners at ShoWest a glimpse of the latest Star Wars film, a feature length animated film called Star Wars: The Clone Wars, based on a popular series of shorts set between episodes II & III from Cartoon Network. The film will then be followed by a TV series, and eventually a live action series set between episodes III & IV. 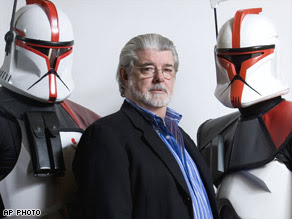 I'm not really sure how I feel about this. Another Star Wars film is not exactly cause for celebration in my book, especially after how the prequels turned out (even if Episode III is pretty good), and it's animated to boot. I'm much more excited about J.J. Abram's new Star Trek movie than this (I'm a fan of both, OK?).

I'm sure there are plenty of fanboys out there wetting their pants over this, I'm just not one of them. Who really thinks than an animated big screen Star Wars film is a good idea?

Maybe it will be good, who knows? But the whole idea has a very ominous feel - our beloved Star Wars is becoming even more of a corporate commodity, its integrity continually ruined by second-rate outings such as this. The good news is that it's being directed by Dave Filoni, who I'm admittedly not familiar with but it's not Lucas himself so that must be a good thing, right?

Time will tell if it is successful or not, but my gut feeling is screaming "NOOOOOOOO!"

Star Wars: The Clone Wars is due in theaters on August 15.
Email Post