The Coens in the Garden of Good and Evil 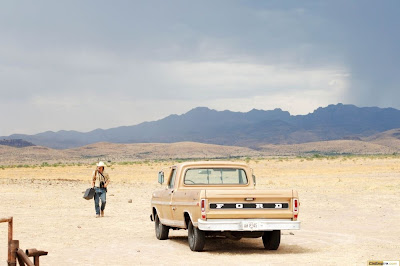 Reed Johnson from the L.A. Times has posted this deeply insightful look at No Country for Old Men and its place in the Coen brothers' career over at The Envelope:

The Coens allow the story's full horror to register, while resisting emotional cheap shots. For example, they pass up McCarthy's description of a dead woman slumped in a rocking chair after being caught in the crossfire between Bardem's character and a group of rival bad guys. In their younger years, the Coens would've filmed that image with glee, maybe even have added a dead pet cat, plugged with a ricocheting bullet. Now solidly into middle age, the Coens have entered their mature phase, more attuned to the perspective that comes with getting older, the understanding that mortality (even the cinematic illusion of mortality) should mean something more than beautifully photographed pools of blood. That perspective suffuses McCarthy's novel, and it's the vision that lies behind the 1927 poem that gave title to his book, William Butler Yeats' "Sailing to Byzantium." In Yeats' poem, an old man, dismayed at his physical decline, rhapsodizes about transmuting himself into a work of art, presumably through the very verses he is reciting to us. His lyrical inspiration is the exquisite, eternal city of Byzantium (modern-day Istanbul), which is "no country for old men" because its sensual vitality is tailor-made for the young. Yeats' narrator muses about the immortality that a work of art can attain. "Gather me / Into the artifice of eternity," he pleads, striking a note that's simultaneously heroic and despairing.

That is probably one of the most eloquent takes on No Country I have read. It's one of those pieces that can actually make you appreciate a film more, and to look at it in new ways.

William Butler Yeats is my favorite poet - and the beginning of the source poem, "Sailing to Byzantium," goes like this:

That is no country for old men. The young
In one another's arms, birds in the trees
- Those dying generations - at their song,
The salmon-falls, the mackerel-crowded seas,
Fish, flesh, or fowl, commend all summer long
Whatever is begotten, born, and dies.
Caught in that sensual music all neglect
Monuments of unageing intellect.