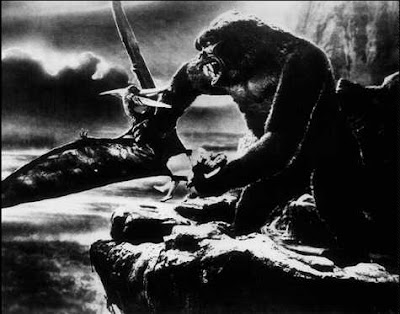 From The New York Sun:

Was the runaway success of "Kong" — a film that not only brought RKO Studios back (temporarily) from the brink of bankruptcy during its first release, but spawned sequels, rip-offs, and remakes in every decade since — a by-product of a profound Jungian connection between the audience and its inner ape? Was it due to a Freudian frisson in which unbound (and in several scenes, bound), rampant, dark, and primitive masculinity relentlessly courted blond innocence and then scaled the world's tallest phallic symbol (which was brand new at the time)? Did Kong represent manifest destiny and colonialism come home not just to haunt but to stomp, chew, and fling to their deaths complacent urban dwellers?

Beauty is in the eye of the beholder, and theory is in the mind of the conjecturer. "King Kong" wasn't created by satirists, psychologists, or critics; he was created by showmen.

King Kong is one of those rare classics - enduringly popular, completely timeless, and yet often severely underrated by critics and film historians.

I don't think anyone will dispute its classic status, but why then is Kong so rarely mentioned when discussing the greatest films of all time?

While it certainly doesn't have the stylistic innovation of Citizen Kane, the scope of The Godfather, the emotional depth of The Passion of Joan of Arc, the singular vision of 8 1/2, or the medieval symbolism of The Seventh Seal, what it lacks in profundity it makes up for in sheer entertainment value. It may quite possibly be the greatest film adventure of all time. 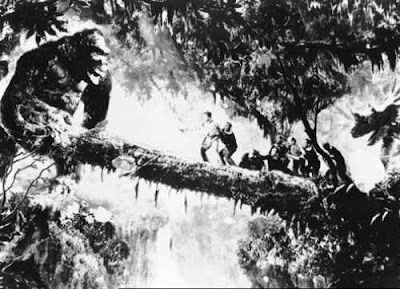 Not even the far more emotionally rich 2005 remake by Peter Jackson can top the original Kong. And even today, those 1933 special effects look mighty fine. Kong is pure adrenaline from start to finish - one of the leanest, most efficient thrill machines ever crafted. Who doesn't remember getting scared out of their mind by this as a little kid? And who remembers what followed? Suddenly, those terrified kids with eyes wide in the glow of the screen flickering in the darkness began to root for the monster. And when those airplanes strike that final deadly blow, and Kong makes his fatal plunge hundreds of feet from the top of the Empire State Building, we were all devastated.

Jackson's remake strikes a more appropriate, tragic tone for that scene, but the original, as directed by Merian C. Cooper and Ernest B. Schoedsack, which took a more sensationalistic approach, still packs a punch. Kong, in effect, becomes even more human than those who seek to kill him - he is the ultimate conservationist metaphor.

Whether that was what Cooper and Schoedsack intended is up for debate. As Bruce Bennett points out in the New York Sun, the directors were first and foremost showmen. But that is part of Kong's charm. Art was the furthest thing from these men's minds, but what they created is a work that has and will stand the test of time because it is entertainment in its purest and best form. It may very well be the greatest show on earth.
Email Post