Sitting in a commercial screening of Drillbit Taylor yesterday (I wasn't able to make the press screening...but don't worry I was there on The New York Times' dime), I had to suffer through some of the most insufferable previews I've had to see in a while.

The trailer for Ben Stiller's upcoming Tropic Thunder is actually quite good, and the re-teaming of Will Ferrell and John C. Reilly in Step Brothers looks like it could be amusing. But it was all downhill from there. 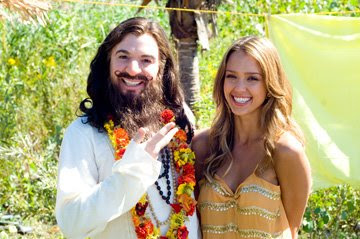 The Mike Myers vehicle The Love Guru looks nothing short of repulsive, ditto the latest Eddie Murphy "comedy," Meet Dave. These are the kinds of trailers that make me wonder if people actually see these and think "wow, that looks like something that would really be worth my time!"

Do these people exist? Are there really people out there who find this drivel in any way entertaining or enriching? These are both summer films, yet I can't help but think that there was a time when trash like this would have been dumped in January or September/October, not given prime summer release dates.

Drillbit Taylor is not as horrible as Jeffrey Wells says it is, but it's not exactly something you would call a good movie either. The young leads are appealing, but other than that it's just Superbad-lite.

I found nothing particularly offensive about it (other than the fact that it is made up of nothing but high school movie clichés), the trailers before it were what bothered me. After sitting through them it almost made Drillbit look like passable entertainment.
Email Post

Fletch said…
Excellent point about the pre-Drillbit trailers (though I was thankfully spared the Murphy one). When people are trashing Drillbit, they need to think back to real garbage like Norbit or Strange Wilderness to put it in perspective.