The Last Days of Heath Ledger 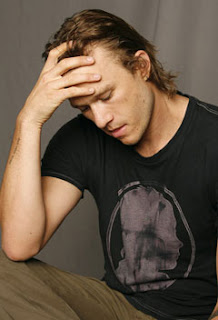 Lisa Taddeo has written a piece for Esquire magazine that imagines the final days of Heath Ledger through the late actor's eyes from beyond the grave.

Now I have to ask, what's the point? I've never been one to subscribe to the "too soon" theory of social protocol, but something about this just seems crass. Here's a sample:

It becomes theatrically important, after you die, what your last few days are like.

For me, it was just like any other weekend in my life. I didn't eat a last meal, I didn't jerk off any more or any less, I didn't climb a mountain or end up swinging from a noose with Mozart's Requiem in the background. But suddenly it's important exactly what I did, because they are the last few days, and what you do in the last few days, down to your last lunch, becomes a fairy tale.

If you force me to make my last weekend a microcosm of my existence, and what my existence means to you, then I'll tell you how it went and who I played. But first things first: It was an accident. I'm not some fucked-up star who couldn't deal. I could deal; I just couldn't sleep.

The problem with this is that Ledger is not so far removed from us that we need someone to imagine what he thought for us. His memory is still very much alive, and to attempt to try to speak for him after death, especially by someone who never knew him in real life, seems to me the height of arrogant presumption.

I would love to know what Michelle Williams thinks about this. That would probably be the truest window into the validity of Taddeo's story.

Jeffrey Wells, of course, loves it; saying in the comments section of his blog:

...it's an interesting piece of writing. I rather liked it. You can't say Billy Wilder did a good job with Holden's opening dialogue in "Sunset Boulevard" and then turn around and say this is beyond the limit. It's the same idea applied to a real (instead of fictional) dead man. All bold ideas are tut-tutted by the tut-tutters.

I'm not quite sure how he justifies comparing this piece of pop-trash tabloid journalism to Sunset Boulevard (the only similarity is the idea of posthumous narration), but I find it hard to be surprised by anything at Hollywood Elsewhere anymore. For every keen observation that I heartily agree with, he always balances it with another outlandish opinion that makes him seem every bit as closed-minded and isolated as the conservative rubes he rails against so often. I often wonder if he just supports things like this just to be contrarian, or to seem edgier and more hip than he really is.

Meanwhile, Karina over at Spout Blog has a more reasonable reaction:

I tried to read the story in order to make up my own mind, but I couldn’t get past the third sentence––something about the idea of a writer imagining a dead celebrity talking about how often he masturbated before his accidental death got blocked by my puke filter, I guess.

It will be interesting to see how the general public reacts to this, and how Esquire will handle it. I'm still shocked they published it at all.
Email Post