I received an email today from a Paramount Vantage rep inviting me to an upcoming festival screening of Nanette Burstein's Sundance hit documentary, American Teen, on April 5. 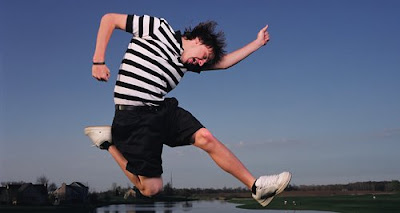 The press release sums it up thusly:


AMERICAN TEEN is the heartbreaking and hilarious Sundance hit that follows the lives of four teenagers- a jock, the popular girl, the artsy girl and the geek – in one small town in Indiana through their senior year of high school.

We see the insecurities, the cliques, the jealousies, the first loves and heartbreaks, and the struggle to make profound decisions about the future. Filming daily for ten months, filmmaker Nanette Burstein (ON THE ROPES, THE KID STAYS IN THE PICTURE) developed a deep understanding of her subjects. The result is a film that goes beyond the enduring stereotypes of high school to render complex young people trying to find their way into adulthood.

I plan to attend the screening, but won't be able to review the film until its theatrical release sometime late this summer.

I'm really looking forward to this one - I've heard some very good things, and Burstein's The Kid Stays in the Picture was a big critical success, so I'm hoping this one lives up to my expectations.

Burstein will also be present at the screening for a Q&A session after the film and will be available for interviews.
Email Post

Anonymous said…
Looks very interesting to me. I'll keep a lookout, but I'll doubt they will show it here in the UK anytime soon. Hope for a swift DVD release. I should definitely watch more documentaries.
3:12 AM

Anonymous said…
I am really interested in seeing it too, but it will probably not make its way to SA screens either, unless it is a monster hit in the US. Either way, I'll end up seeing it someday. I hope you enjoy it Matt. BTW, I saw Spiderwick today, and you were right, it was good.
1:52 PM

Anonymous said…
Is this the one Jeff Wells got kicked out of at Sundance, but he slammed it anyway?

Looking forward to hearing your more reasoned take on it Matthew.
7:16 PM

Matthew Lucas said…
Craig, I think this is the one. I don't remember his story though.