As far as recent comedies go, David Schwimmer's directorial debut, Run Fatboy Run (which opens today in wide release), is actually pretty good. It's nothing groundbreaking or out of the ordinary, but it is a competently made, even heartwarming little comedy with a nice British twist. 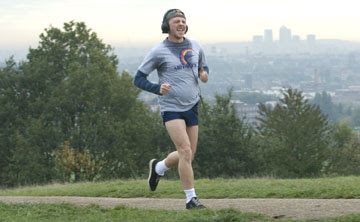 Who would have thought Ross could have put together such a solid little movie? It's all pretty predictable, but it's enjoyable nonetheless.

I'll be hammering out a full review for next Thursday's Dispatch, but I wanted to go ahead and give it a little boost. There is nothing in it that hasn't been done before, but it's done with conviction and charm, putting it into an above-average category it might not otherwise have attained.

The cynics can wag their fingers if they want, but one must be able to recognize well-done formula, even if it is formula. And Run Fatboy Run is definitely one of the better comedies currently playing in wide release.
Email Post

Anonymous said…
Hmm interesting. I Was going to give this a miss. The promotional posters for this are horrible. It just looks stupid. You got me thinking otherwise.
10:21 AM

Matthew Lucas said…
The posters are indeed atrocious, and the title is horrible, but it's a cute little film that is surprisingly enjoyable for what it is. It's not a 'run out and see it right now' kind of film, but it's charming and likable - a good rainy day movie.
12:18 PM

Anonymous said…
Call me skeptical, but I like Simon Pegg well enough to give it a shot.

Your preview is encouraging. Not every movie has to be a home run.
12:54 PM

Anonymous said…
When I read the title of this movie, I thought it would be about a black kid. I am so strange.