Review: "The Other Boleyn Girl" 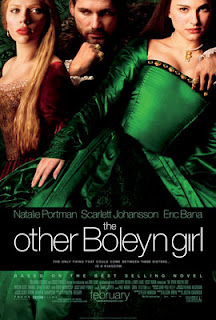 A successful period piece should first and foremost be a total immersion into the time and place it depicts. Braveheart, Elizabeth, and Gladiator, to more contemporary period films like Zodiac are all prime examples of this - pitch perfect evocations of bygone eras in every detail, from the production design to the costumes to the performances.
The Other Boleyn Girl, director Justin Chadwick's big screen adaptation of Philippa Gregory's popular novel of the same name, tries to join that company, but in the end comes up short.

Of course it has all the ingredients - the sumptious production design, fabulous costumes - but it misses the most important thing, the essence.
For all the film's visual strength, I never once got past the feeling that I was watching a bunch of modern people get together and play dress-up. 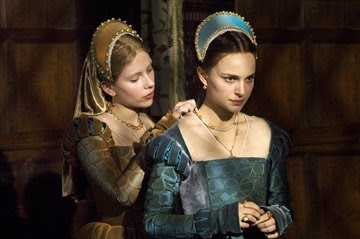 The Other Boleyn Girl is never anything more than a royal soap opera, following the romantic manipulations of Anne Boleyn (Natalie Portman), whose rivalry with her sister Mary (Scarlett Johansson) over the affections of King Henry VIII (Eric Bana) led to the splitting of England from the Catholic Church, and the birth of one of Britain's greatest monarchs, Elizabeth, but ended up costing Anne her head.

But the film is far more preoccupied with the romantic entanglements instead of the historical implications - it's like watching a prequel to Elizabeth that isn't nearly as good. In that vein it's more Golden Age than Elizabeth, but without the kitschy entertainment value.

The Other Boleyn Girl is a dour affair, and the two leads fail to generate any kind of sympathy or interest in their characters - it's all political posturing and catty sibling rivarly and romantic entaglements - but for all the intrigue and conflict it all feels oddly flat. 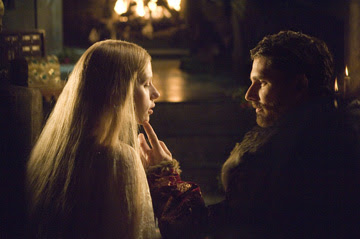 Not that it's a particularly bad film. It's moderately diverting and held my attention for two hours, but I never escaped the feeling that it could have been so much more than it is. The film certainly looks great, thanks to production designer John Paul Kelly and costume designer Sandy Powell, and Paul Cantelon's score is quite good, but the film itself is plodding and unfocused.

I'm a big sucker for period films like this, but ultimately The Other Boleyn Girl left me unsatisfied. It's a grand, gorgeous production to be sure, but there is little substance beneath the glitz.

Anonymous said…
Sounds a little like my impression of "The Golden Age," lol. Well said, even if we disagree a tiny bit.
4:52 PM