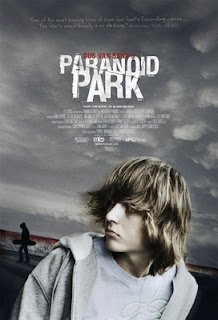 In Gus Van Sant's latest film Paranoid Park, the prolific director wastes no time in drawing us into the world he creates. But what is so fabulous about this world is that it doesn't seem created at all, but wholly organic, as if Van Sant just stumbled across it and set up a camera to capture what he saw.

Enter the world of Paranoid Park, a skateboarding hangout for local teenagers, where one in particular, Alex (newcomer Gabe Nevins), a sullen, self-conscious high-schooler who wants to skate like the older guys but can't quite make it, accidentally becomes involved with the violent death of a local security guard, and must come to terms with his own growing guilt while navigating the complex world of high school relationships.

Van Sant is a master of detached observation, placing a camera in front of his subjects and just letting them be. But his brilliance, on keen display here, is that we are never really detached from what is going on. By taking an objective perspective, Van Sant allows us a window into their world - and the sense of time and place is keenly felt. 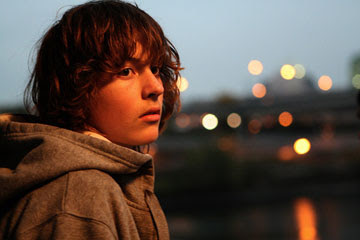 Through the performances of the mostly non-professional cast (Taylor Momsen, as Alex's girlfriend, has been around for a while though...my how far Cindy Lou Who has come), Paranoid Park captures the essence of high school life better than most teen movies could ever dream. Van Sant achieved a similar feat in the Palme D'Or winning Elephant five years ago, but despite some truly beautiful moments in that film I have never really been a fan of it. Here, however, Van Sant has achieved something very close to breathtaking. The blurred images of soaring skateboarders that repeat throughout the film take on a hauntingly surreal beauty, almost as if they are a foggy notion of what Alex could one day achieve, or something he sees begin to fade away as a tragic accident changes his life forever.

The acting isn't always stellar, but it is truthful - and that is the key. The teenagers all still have that awkward self-consciousness we all remember, and it translates into a wholly immersive and believable world. 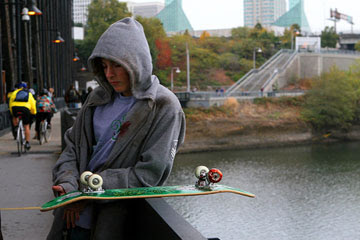 In Paranoid Park the camera is a window to the soul, and cinematographer Christopher Doyle (In the Mood for Love, Hero) treats it as such. It allows images to linger in the mind and sink slowly in, like a lingering sunset or a flowing river. And through his lens, Paranoid Park becomes a place we all remember, where a frightened little boy growing up in an ever changing world must learn to deal with things he doesn't always understand or know how to handle. It is teenage life seen through a horrific situation to amplify that unspoken fear that we all feel, but precious few know how to articulate.

But Van Sant does, and he articulates it with a lyrical grace that transcends words - he says more with glance or a song or complete silence than many films ever do - and that makes Paranoid Park one astonishing piece of work.

I cannot wait to see this movie! I hate you people in the US...some of the time....

Great review though, you only fuel my desire to see it even more.
12:33 PM