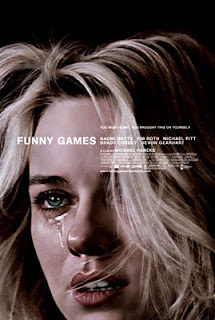 Either way, I love Funny Games. And I will continue to champion it even in the face of its severe critical thrashing. But people are outraged by it, incensed by it, and most leave angry, upset, or worse.

And for that I applaud Haneke. To be able to make a film that provokes that kind of extreme reaction in people, especially intentionally, is an achievement indeed. By trashing the film they way so many have, Haneke has actually succeeded in his goals. It's all part of that Brechtian construct that many find pretentious, but I will always respect (compare Funny Games to, say, Godard's Weekend).

It's hideous, it's enraging, it's sadistic, it's brilliant. It's a movie that punishes you for even daring to sit in the theater, but hey, I respect that. It's a psychological brute force movie that relentlessly puts its audience through hell like a cinematic torture device. But if that was what it was aiming for, and that is what it succeeds in doing, doesn't that make it a successful film?

It's not a movie people are supposed to enjoy, or feel good about upon leaving. If it infuriated you then it achieved its goals and is therefore a well made film and not deserving of the low, low grades that it is receiving. You may not like it, but that doesn't mean its bad.

I just don't understand how people can say stuff like this:

"The fact that it features fine performances, talented direction and some moments of genuine suspense only makes the end product that much more grotesque and appalling." - Richard Roeper

And then give it a bad grade. He admits that it is well acted and directed...yet then gives it a rotten grade. That is not what film criticism is supposed to do...we are supposed to recognize quality filmmaking even when it repulses us to do (i.e. The Birth of a Nation, Triumph of the Will).

I wanted to make sure I wasn't the only one singing Haneke's praises, so I did a quick scan on Metacritic and Rotten Tomatoes to get some glowing notices for Funny Games:

"Can a movie be gripping and repellent at the same time? In Funny Games, a mockingly sadistic and terrifying watch-the-middle-class-writhe-like-stuck-pigs thriller, the director Michael Haneke puts his characters in a vise, and the audience too." - Owen Glieberman, Entertainment Weekly

"A chilly and extraordinarily controlled treatise on film violence, Funny Games punishes the audience for its casual bloodlust by giving it all the sickening torture and mayhem it could possibly desire. Neat trick, that." - Scott Tobias, The Onion (A.V. Club)

"This is cinematic gamesmanship that is simultaneously brutal, bizarre and elegant in its audacity. Director Haneke has artistically exploited cinematic structure to play with and engage the mind. It's a very funny game indeed." - Adam Fendelman, HollywoodChicago.com

There are more of course, but you get the point. Funny Games wears its purpose on its sleeve, but there is plenty going on beneath the surface as well...but it must be experienced. For better or for worse this is a film that demands to be considered by every serious film buff, cinephile, or critic.

My only issue with the remake is that Haneke remade the film to reach an American audience, but the only Americans who see this remake are the type that won't mind seeing a subtitled film anyway. He is essentially preaching to the choir...but it is a message worthy of being heard.
Email Post

Evan Derrick said…
I'm one of those zero star guys on this one.

Not because I found it repulsive (though it was), and not because the content angered me (although it did), but because Haneke has essentially tricked his audience into participating in an experiment when they think they're watching a film. He's not interested in the movie itself - just in screwing with the viewer. Statements about America's love for violence aside, I just don't like paying for what amounts to a bait-and-switch.

As a post-modern existential conversation starter, I'd give Funny Games 5 stars. As a film? Zero.
3:09 PM

Evan Derrick said…
Over on my site, a colleague (who had a reaction similar to yours) and I are engaging in a structured debate on the film. I think it brings up some interesting points, and your contribution to the conversation would be appreciated.

Regardless, enjoying reading the site. I'll be sure to send you any Renee Zelwegger pictures that I find.
2:13 PM