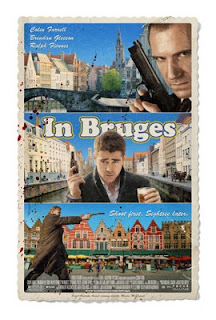 Director Martin McDonagh won the Academy Award for Best Live Action Short film in 2005 for Six Shooter, a film that I was admittedly not a fan of (I was pulling for the haunting Icelandic nominee, The Last Farm). I found the film well made but ultimately grating and unpleasant, but I want to revisit it after seeing his first feature length film, In Bruges.

When Six Shooter was released, McDonagh's style invited comparisons to Quentin Tarantino, and In Bruges cements that, playing out like an Irish Pulp Fiction set in Belgium.
But to say McDonagh is merely an Irish Tarantino is a disservice to a fantastic director with a clear, singular voice.
In Bruges follows mismatched hitmen Ray (Colin Farrell) and Ken (Brendan Gleeson), who have been sent to the medieval town of Bruges, Belgium after a botched hit to lay low and wait for their next assignment from their mysterious and volatile boss, Harry (Ralph Fiennes). 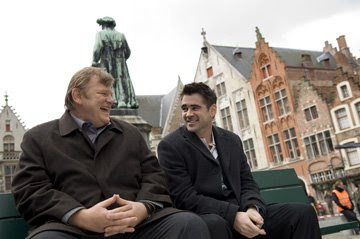 McDonagh's screenplay is devilishly witty, filled with macabre humor and gleefully irreverent observations about everyone from fat American tourists, to the mentally disabled, to midgets. In other words, it's not a film for the easily offended. But for those who can stomach drolly offensive humor peppered with ultra-violence and nearly non-stop profanity, then In Bruges is a rare treat indeed.

Surprisingly enough the tone is more melancholy than ironic, which is what separates McDonagh from Tarantino. As much as I love Tarantino's work, you would be hard pressed to find a beating heart in any of his films outside of Kill Bill: Vol. 2. But beneath In Bruges' cynical veneer lies the wounded soul of a man who has done the unthinkable, and has had to live with the pain ever since. 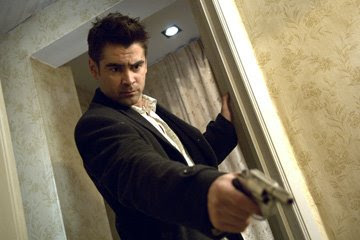 The difference is clear from the opening credits, where McDonagh makes great use of the scenery and architecture of the ancient town, accompanied by Carter Burwell's wistful piano theme. In fact music is one of the film's strongest aspects, especially the powerful use of The Dubliners' "Raglan Road" near the end of the film.

In Bruges works on so many levels - as a comedy, as an action film, as a mood piece, but above all, an exercise in pitch perfect filmmaking. McDonagh really nails this one, everything about it is perfectly executed and finely tuned for maximum impact, and all the performers are in absolutely top form (Gleeson and Farrell have never been better).

In short - I loved every single minute of it. McDonagh's first feature film hits it out of the park in a bloodly blaze of drunken Irish rage - with plenty of profane insults just for good measure. In Bruges is a an absolutely maniacal, and yet strangely beautiful, pleasure.

Evan Derrick said…
Felt the same way about Six Shooter, and while my review of In Bruges wasn't quite as glowing as yours is (McDonough seems to be an acquired taste that I have barely acquired), I still thought it was excellent filmmaking. Farrell, especially, proves himself to be an actor of considerable talent. He needs to find more roles like this, and leave the Gladiator-ish ones to the likes of Russell Crowe.
12:22 PM