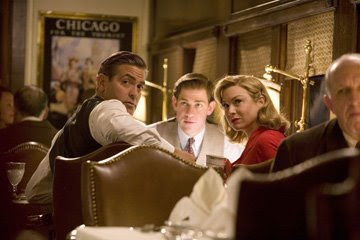 George Clooney's Leatherheads (Universal, 4.14) was shot near where I live (the train station scenes were filmed where I had my high school prom), and with the release date close at hand, I began to remember the almost ridiculous amounts of coverage it was given by our local paper. Not The Dispatch, but the Salisbury Post. Check out this gem from March 19, 2007:

Josiah Gamble was working the drive-through window Thursday at Starbucks when he got an unexpected customer -- Renee Zellweger, a star in the movie "Leatherheads."

"She came through and she had the visor down in her car like she was trying to block her face," he said.

Her shoulder-length blonde hair was curled 1920s style and she had on her full costume, Gamble said.

"I was trying to be professional about it. I didn't want to scream or ask for her autograph or anything," he said.

Zellweger came to the window and ordered five drinks. Gamble couldn't remember exactly what she got but "it was all soy stuff," he said.

When she was at the window, she told Gamble she was going to come inside to use the shop's rest room and then she'd get the drinks.

"She was friendly and she had a really soft voice," he said.

NEWSFLASH: RENEE ZELLWEGER USES SALISBURY RESTROOM!! There's something painfully pathetic about that kind of star-fawning. Movie stars come to town and suddenly their trip to the Starbucks drive-thru becomes newsworthy.

They did casting calls for extras for weeks, and I considered going but was just never motivated enough. I figured there was no point in fighting through the throngs of star struck fans trying to get close to Clooney who could care less about acting to bother with it. Sure it would have been a neat experience, but un-professionalism is just something I can't stand. And if that news article was any indication then I was going to be in for it. My school schedule wouldn't have allowed for it anyway...school is 2.5 hours away from home and is where I spend most of my time.

Still, it will be nice to see familiar places on the big screen. I hope the film is the breezy throwback that it promises to be.
Email Post