You'd be hard pressed to find a franchise as wildly successful and yet as deeply cynical as the Jurassic World franchise. What started off in 1992 with perhaps one of the most elegantly crafted and wondrous blockbusters ever made has devolved into shameless nostalgia bait and a series of convoluted subplots that distract us from what we're really here to see - and that's dinosaurs. 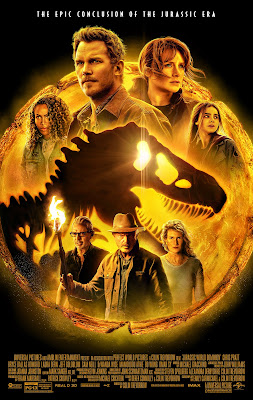 Steven Spielberg used his dinos sparingly and effectively, and did so again in his sequel, The Lost World; which despite a less than enthusiastic critical response, remains the strongest sequel in an increasingly dire bunch. I was a fan of 2015's Jurassic World, which came as close as anyone has to recapturing wonder of Spielberg's original Jurassic Park. But its sequel, Fallen Kingdom, and now Dominion, have gone down a needlessly complex rabbit hole of back story that has little to do with the classic original it seems so desperate to evoke.

Several years have passed since dinosaurs were released into the wild on the mainland in Fallen Kingdom, and free roaming prehistoric creatures has become a worldwide fact of life. While Owen Grady (Chris Pratt) and Claire Dearing (Bryce Dallas Howard) hide out  off the grid with young clone, Maisie Lockwood (Isabella Sermon), Dr. Ellie Satler (Laura Dern) is investigating a swarm of giant locusts that are devastating crops in the midwest. She enlists the help of her old friend, Dr. Alan Grant (Sam Neill) to fly with her to a dinosaur sanctuary in Italy run by former Ingen competitor, Biosyn, to investigate their connection to the impending ecological disaster. There, they meet Dr. Ian Malcolm (Jeff Goldblum), who has suspicions about Bison CEO, Lewis Dodgson (Campbell Scott), whose attempt to steal Ingen secrets led to the first disaster at Jurassic Park nearly 30 years earlier

There's a lot going on here, and none of it really comes together in a satisfying way. Director Colin Trevorrow doubles down on some of the worst plot contrivances of Fallen Kingdomby putting the young clone at the center of the story. Her connection to the origins of the park are tenuous at best, considering these associates of Jurassic Park founder John Hammond were only introduced in the previous film, so the Trevorrow's attempt to wring nostalgic pathos out of her story rings false.

On the one hand, it's nice that Trevorrow and company have made Dodgson and Biosyn into the central villains, since those are elements of Michael Crichton's Lost World novel that Spielberg ignored in his sequel back in 1997. But Jurassic World Dominion does very little with this storyline other than as a "hey remember that guy" callback to the original. Dodgson even has Dennis Nedry's erstwhile Barbasol can prominently displayed in his office. Why? How? Doesn't matter in this movie's dull parade of nostalgic reminders of better movies from years ago. It's nice to see Dern, Neill, and Goldblum reunited, but their presence almost serves to highlight how dire the material here really is - there aren't really any stakes, no one really gets eaten, and the dinosaurs take a back seat to Biosyn's swarm of genetically engineered locusts courtesy of Dr. Henry Wu (BD Wong), who's had a sudden change of heart since becoming the series' maniacal supervillain in Jurassic World and wants to set everything straight.

The film feels like a mishmash of dueling ideas that never fully congeals. Trevorrow leans hard on the nostalgia, filling the film with callbacks and allusions to the original in ways that don't feel necessary or organic. It's trying so hard to make us feel something that it ultimately pushes the audience away, never grounding its emotional beats in anything other than cynical reminders of something we loved when we were children. One can only hope that Jurassic World Dominion truly is the "final chapter of the Jurassic era" that it claims to be, because it's been such a depressingly downhill journey for this series that it seems way past time to put it out to pasture. Gone is the wonder and the real sense of menace and suspense that Spielberg mined from Crichton's novel back in 1993 - and in its place is a bland retread of superior material with no ideas or point of view of its own. Bring on the asteroid.