Lucia Puenzo's XXY is the kind of film defies pithy blurbs. It's impossible to categorize, because the film itself refuses to put easy answers to hard questions, and, much like its characters, refuses to be put in a nice, tidy box. It is the kind of filmmaking we yearn for but so seldom find - soulful and searching, exploring life in ways few people dare to imagine, asking questions that are often avoided, even in contemporary queer discourse. 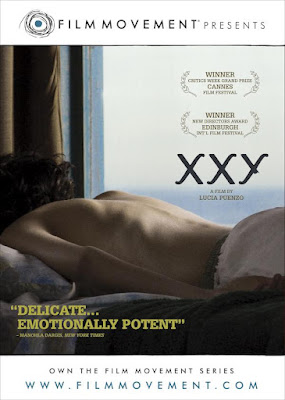 The film introduces us to Alex, an intersex teenager born with both male and female genitalia, who is dealing with the eternal pressures of growing up, grappling with their sexuality, and struggling with their own identity. Their parents have invited a respected surgeon to stay the weekend in hopes of getting Alex to have a gender reassignment operation to make them female. Yet Alex still has not quite figured out who they are, and in her state of confusion begins to lash out at the world.
They begin to form a bond with the surgeon's 16 year old son, Alvaro, who is dealing with issues of sexual identity of his own. This could have easily become an overwrought soap opera, filled with teenage angst and melodrama, but it is a testament to Puenzo's prowess as a director and craftsman that this is never the case. XXY is bold, meaningful filmmaking, fearlessly exploring ideas of human gender identity and sexual orientation. Alvaro may or may not be gay, Alex may or may not be a woman. Perhaps they are truly both. In the end it doesn't matter. The only thing of any importance is the bond they share and the place deep within where they are most themselves. Don't come to XXY looking for simplicity. The subject matter is handled with grace and empathy, even if it doesn't shy away from its sexual nature, but it is a film of many layers with volumes left unspoken. It is a raw, honest film, sexually frank and deeply insightful, and we are left with the feeling that love and life will defy all bounds, breaking barriers between genders and societal norms.
Email Post
Labels: pride