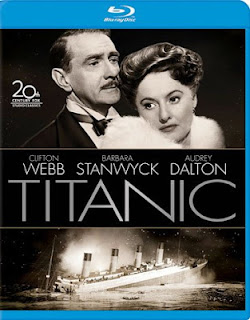 As someone who has been fascinated by the sinking of the Titanic from a young age, Jean Negulesco's 1953, Academy Award winning Hollywood melodrama, Titanic, has always been a bit problematic for me.

One of the opening title cards claims that "all navigational details of this film - conversations, incidents, and general data - are taken verbatim from the published reports of inquiries held in 1912." But despite its claims of historical veracity, it's actually one of the most inaccurate depictions of the disaster ever put on screen. While not quite as bad as the 1943 Nazi propaganda film of the same name, historically speaking it's pretty close, especially when compared with the painstaking accuracy of Roy Ward Baker's A Night To Remember, which was released five years later in 1958 and offered the most complete cinematic portrait of the events of April 14th and 15th 1912 as it was understood at the time. 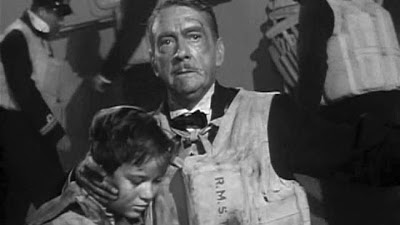 Perhaps the most glaring element of Titanic is its complete lack of understanding of Edwardian society. The upper class as depicted in the film is the upper class of the 1950s, not the upper class of the early 1900s. A respectable man like Clifton Webb's Richard Sturgess would never walk up to a man like Isidor Strauss in the dining saloon and suggest that he's "up to something" by serving his wife, Ida, alcohol, even if it was a joke. Not to mention the fact that the ship's band, which in reality was a string band, is made up mostly of trumpets and saxaphones and plays music that sounds more like big band than waltzes and ragtime, which would have been the musical style of the time. And while the band playing "Nearer My God to Thee" as the ship goes down is a big part of the mythology of the Titanic (a common and acceptable legend,  if most likely untrue), having the doomed passengers sing along as the ship slips quietly into the North Atlantic is about as far from history as you can get. It's pure Hollywood melodrama, and a pretty goofy one at that.

Nitpicks about the societal behavior and historical accuracy aside, the story itself is mostly soap opera fodder. Clifton Webb plays a wealthy American father who pursues his estranged wife, Julia (Barbra Stanwyck) onto the Titanic to persuade her to come home. Julia is tired of the high society of Paris, but their daughter, Annette (Audrey Dalton), longs for that life and wants to stay with her father. Julia thinks there is still time to save their son, Norman (Harper Carter), from the kind of arrogance she sees in his father. But the boy worships Richard, and refuses to be parted from him, even after a shocking revelation by Julia. It's a pulpy family drama played out against the backdrop of one of the greatest maritime disasters in history. 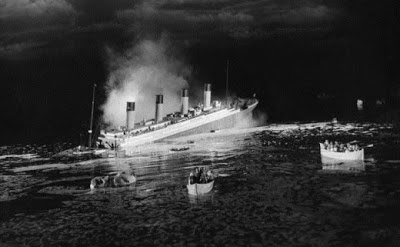 The thing is, the story itself really isn't the problem. It's standard Hollywood stuff, but Webb and Stanwyck are both in fine form, adding moments of humanity and emotional truth to the otherwise stilted surroundings.  The real issue is the complete mishandling of the actual disaster. Blaring alarms, exploding boilers, glaring anachronisms and other inaccuracies (the iceberg inexplicably rips a hole in the wrong side of the ship) plague the film despite its claims to the contrary. Granted, they won't be as big an issue to the uninitiated, but it's still surprising just how off base it is.

Taken apart from the history, the film really isn't that bad. The always welcome Thelma Ritter provides some nice moments of levity in a role clearly inspired by the "unsinkable" Molly Brown, and Audrey Dalton and Robert Wagner make for an attractive couple. The actual sinking sequence is pretty harrowing, especially with the limited capability of the special effects, although the hymn singing in the ship's final moments is just too much to handle. It's all pretty standard stuff, unremarkable really except for the Titanic connection. It's likely that if the film were about a different ship that it would be barely remembered today. But fans of James Cameron's far more famous 1997 Titanic will probably enjoy spotting moments that inspired Cameron (Webb's exasperated proclamation that the "British always insist on announcing dinner like a cattle recharge" is echoed by Kathy Bates' Molly Brown in the ''97 film), while historians will probably cringe at the film's complete lack of historical accuracy. It clearly didn't get Edwardian society, but as a product of its time it works just fine, and Fox's new Blu-ray presentation is passable if not particularly spectacular, much like the film itself. Most notable is a commentary track featuring Audrey Dalton and Robert Wagner, as well as some Movietone news reels from the time that provide a small glimpse into the world it came from.  Titanic is very much a product of its time rather than the time it depicts, and one's enjoyment of the film will depend very much on one's tolerance for 1950s soap opera dramatics. Those looking for a great film about the Titanic rather than just a love story would be better served by sticking with Ward's far superior A Night to Remember.