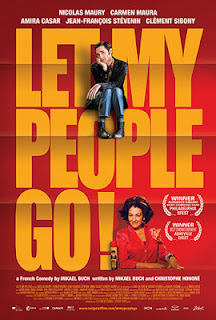 Mikael Buch's Let My People Go! doesn't exactly break any new ground in the world of gay comedy. Its hero, Reuben (Nicholas Maury), is a flaming stereotype, with an equally stereotypical Jewish family. But rather than lazily coasting on stereotypes substituting for character development, Buch lovingly embraces those stereotypes in a strangely personal way.

In Let My People Go!, stereotypes serve not to marginalize or ridicule the characters, but to embrace the idiosyncrasies of family, something clearly very near and dear to the director's heart. This is the kind of film that can only come from someone comes from its world to some degree.

Buch's own multicultural background informs the clear affection he has for these characters. Co-written by Christoph Honoré, Let My People Go! is the story of Reuben, a gay French postal worker living in Finland with his husband, Teemu, who is forced to return to France to live with his eccentric Jewish family after the two of them have a fight.

This isn't your run of the mill lovers' quarrel either. On his daily mail route, an irate man refuses a package that contains nearly $200,000. He asks Reuben to keep it for himself, but when Reuben refuses, the man forcibly tries to reject the package, and has a heart attack in the process. Distraught that people will think he stole the money and killed the man (and refusing to call the police as Teemu demands before kicking him out), Reuben flees to France. His family is tradition, but not so much so that they don't accept Reuben for who he is. The lack of homophobia in the film is especially refreshing. Let My People Go! embraces everyone for who they are, quirks and all.

It's a bit too broad at times, and the outrageousness of the stereotypes are often so over the top as to be silly rather than truly funny, but there's a certain charm about it that is hard to resist. The presence of Almodovar regular Carmen Maura as Reuben's Jewish mother doesn't hurt either. It's a fabulously campy good time, the kind of film the feels like a non-stop party from start to finish. It's neither groundbreaking nor particularly deep, but it's certainly a lot of fun. It's nice to see a film embrace and use stereotypes to its advantage rather than coast on them out of laziness, and Let My People Go! is a winking lampoon of such preconceived notions that gets a lot of mileage out of sheer charm.