It probably goes without saying that this list is somewhat dominated by The Criterion Collection, but 2012 also saw some smaller specialty distributors stepping up to challenge the arthouse juggernaut. There was a wealth of great films making their way onto home video this year. Here are ten that really stood out.


1
THE QATSI TRILOGY
(The Criterion Collection) 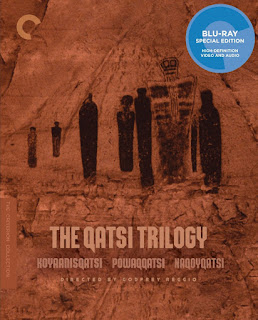 Godrey Reggio's visionary documentaries, wordlessly chronicling life on Earth set to Philip Glass' mesmerizing scores, get a magnificent treatment from the Criterion Collection, a year end jewel in a banner year for Criterion box sets. Koyaanisqatsi (1982) remains perhaps the definitive chronicle of human existence, as it explores the human race's impact in a once pristine landscape. If I were making a time capsule for a future alien race to discover long after humans have gone extinct, Koyaanisqatsi would be the first film I'd choose, and Criterion's gorgeous blu-ray transfer is the treatment it deserves, preserving it for future generations in all of its transcendent, spiritual glory.

2
THE CINEMA OF JEAN ROLLIN
(Kino/Redemption) 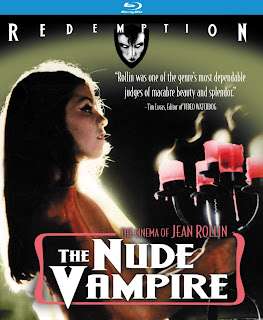 While not one single release, perhaps, Kino's Redemption series of 10 erotic horror films by French exploitation auteur Jean Rollin represented the finest one of the finest extended releases of the year. Some good, some bad, all fascinating, these 10 films offer a glimpse into the mind of an artist often hampered by studio mandated eroticism in order to sell his strange and unique visions, which still managed to shine through the often laughably gratuitous sex. The best of the lot is 1973's The Iron Rose, a masterpiece in any genre, but the rest of the films, including The Nude Vampire (1970), The Shiver of the Vampires (1971), Lips of Blood (1975), Fascination (1979), The Demoniacs (1974), Requiem for a Vampire (1971), The Rape of the Vampire (1968), The Living Dead Girl (1982), and Two Orphan Vampires (1997) represent the core of a truly singular filmography. Kino's Blu-ray treatment of each title, along with thorough liner notes by Tim Lucas, is top notch.

3
THIS IS CINERAMA
(Flicker Alley) 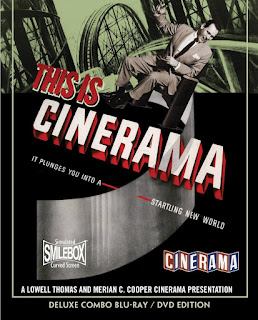 While not necessarily a great film in and of itself (it's essentially an extended clip reel designed to showcase a new technology), This is Cinerama (1952) was nevertheless treated to a showcase blu-ray release by Flicker Alley (along with a separate release for the 1958 Cinerama title, Windjammer) that is perhaps the most impressive in the specialty label's history. Presented in "Smilebox," preserving the wrap around panoramic splendor of the three screen Cinerama medium, this Blu-ray set is the closest many of us will ever come to experiencing Merian C. Cooper's legendary roadshow. Cinerama may not have turned out to be the future of film, but Flicker Alley's exhaustive set rivals Criterion in its exploration  of the film's historical importance and legacy. One of the year's most essential discs.

4
ON THE BOWERY: THE FILMS OF LIONEL ROGOSIN, VOL. 1
(Milestone) 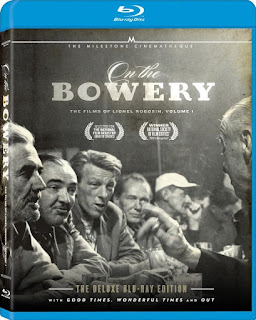 There are few labels more dedicated to the preservation of film history than Milestone, and its president, Dennis Doros. 2012 was a strong year for Milestone, including an kid-friendly Blu-ray release of Mary Pickford films designed to introduce children to silent film, a unique and refreshing undertaking that brought some of Pickford's most beloved films to Blu-ray for the first time. Their flagship release of the year, however, was Lionel Rogosin's seminal 1956 chronicle of New York life, On the Bowery. Selected for the National Film Registry in 2008, On the Bowery mixes documentary footage with scenes featuring non-professional, real life Bowery residents, taking a hard look at the impoverished conditions of one of New York's overlooked districts. The lovingly produced Blu-ray set also includes Rogosin's Good Times, Wonderful Times and Out. 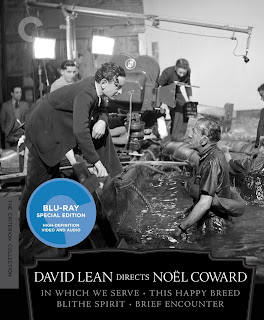 Criterion really outdid itself when it came to box sets this year. This set, which includes In Which We Serve (Lean's directorial debut), This Happy Breed, Blithe Spirit, and his masterpiece, Brief Encounter represents some of the most thoroughly entertaining films in the entire Criterion Collection. In Which We Serve showcases a thrilling young talent, This Happy Breed mourns a way of life in decline surrounded by war, Blithe Spirit provided supernatural escapism, and Brief Encounter would go down as one of the finest works Lean would ever produce. Criterion takes us on a grand tour of the birth of one of cinema's greatest artists. 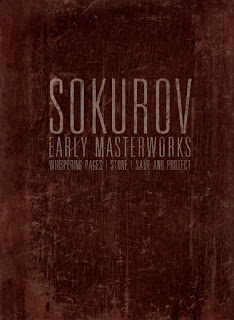 Cinema Guild continues to impress more and more with each passing year. Not only in the quality of their theatrical releases (which this year included Once Upon a Time in Anatolia, The Turin Horse, and Neighboring Sounds), but in their home video acquisitions as well. What makes them so special is how they seemingly improve upon themselves with each release, gradually learning and expanding into one of the absolute best distributors on the market. 2012 was their finest year yet, culminating in an excellent box set release of early films by Russian filmmaker Aleksandr Sokurov (Russian Ark). Sokurov's desaturated colors and hazy cinematography are especially impressive on Blu-ray in Whispering Pages, his 1994 distillation of Dostoevsky that never got released in the United States. It's a breathtakingly gorgeous work, slowly devolving into black and white, crowning a banner year for Cinema Guild in grand fashion.

7
TO KILL A MOCKINGBIRD
(Universal) 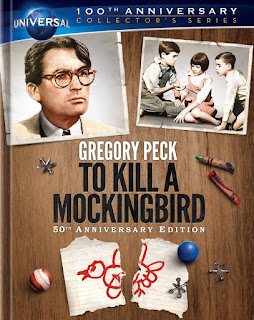 Universal's year long 100th anniversary celebration got off to a fantastic start with a long awaited Blu-ray release of one of their most beloved films, To Kill a Mockingbird. While the rest of the year would see the likes of E.T. The Extra Terrestrial and Jaws finally making their way onto the HD format, but it is the quiet beauty of Mockingbird that I think impresses the most. Its gorgeous black and white images are more beautiful than ever in their crystal clear Blu-ray presentation. Robert Mulligan's classic adaptation of Harper Lee's immortal exploration of injustice and racism filtered through childhood innocence remains one of the most hauntingly beautiful films ever made.

8
TRILOGY OF LIFE
(The Criterion Collection) 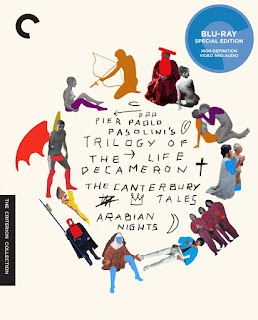 The premier release of Criterion's prestigious November slate, Pier Paolo Pasolini's Trilogy of Life, a trio of adaptations of medieval texts - The Decameron, The Canterbury Tales, and Arabian Nights, represent the Italian director's slyly subversive examination of the relationship between sexuality and religion. The Trilogy of Life showcases a more innocent view of sex through Pasolini's idealistic vision that would soon give way to a more cynical outlook at a world in decline, later represented in his infamous masterpiece, Salo, or the 120 Days of Sodom. Perhaps the most beautifully packaged of Criterion's 2012 releases, the Blu-ray set is a sumptuous feast for Pasolini fans and cineastes alike, looking to explore one of the most fascinating trilogies in cinema history. Pasolini infused his films with an earthy, naturalistic take on medieval life, rich in symbolism and period detail. Their gleefully blasphemous sense of humor is coupled by an almost naive simplicity that seems a world away from the degradation he would later showcase in Salo. 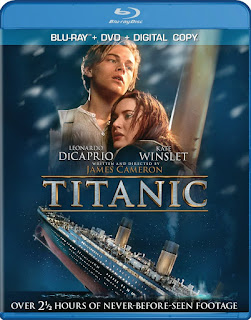 Once the highest grossing film of all time (until James Cameron's own Avatar knocked it off its throne), Titanic, the Gone with the Wind  of my generation, at long last arrived on Blu-ray in 2012. And what a glorious set it is. Cameron always uses the most state of the art technologies to make sure his films get the presentation they deserve, and Titanic is certainly no different. The picture is pristine, the sound is perfect, it is, in short, the very definition of a showcase disc. The epic glory of the 11 time Oscar winning film is preserved and even enhanced here, reminding us just what Blu-ray is really all about. 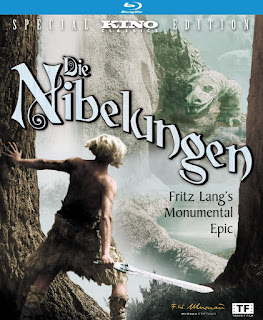 Kino did well by Fritz Lang this past year, also releasing the director's Scarlet Street on Blu-ray, as well as a set of three of the director's early works on DVD later in the year. The best of them all, however, was Lang's two part silent epic, Die Nibelungen. Released in 1924 as two films - Siegfried and Kriemhild's Revenge, Die Nibelungen is based on the old German legend recounted in Quentin Tarantino's Django Unchained, in which the hero, Siegfried, sets out to rescue his beloved Brunhild. A sweeping epic of the first order, Die Nibelungen presages the monumental brilliance of Lang's masterpiece, Metropolis, in its sheer scope and ambition. And while the effects may be somewhat hokey by today's standards, this really is everything we go to the movies for - heroes, damsels in distress, castles, dragons, epic battles - truly a film equal to the proportions of the legendary tale that inspired it. Kino's Blu-ray transfer is shockingly good for a film that is 89 years old, proving that even silent films can be as relevant and timeless to modern audiences as they were in their own time.

HONORABLE MENTIONS
ONCE UPON A TIME IN ANATOLIA (Cinema Guild)
The gorgeous colors and long takes of Nuri Bilge Ceylan's epic procedural come to thrilling life via a stunning HD transfer.

WEEKEND (The Criterion Collection)
Godard's messy, vibrant masterpiece finally comes to Blu-ray. His most brilliant achievement, and Criterion gives it the disc it deserves.

LONESOME (The Criterion Collection)
A lost gem that bridges the silent and sound eras, this is top notch work on all levels. The early color sequence especially dazzles.

A HOLLIS FRAMPTON ODYSSEY (The Criterion Collection)
An avant-garde master sees his work released in one comprehensive package. There are lots of treasures to be discovered here.

RAGS & RICHES: THE FILMS OF MARY PICKFORD (Milestone)
Kid friendly bookends introduce Pickford's films to young audiences of a generation with no connection to silent film. The acting is a bit hokey in the bookends, but it all works surprisingly well in context, and the films themselves are impeccably rendered (one often forgets just how good these films actually are).
Email Post