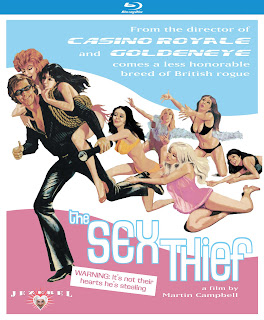 Who would have guessed that the debut feature of Martin Campbell, director of Casino Royale, Goldeneye, The Mask of Zorro and Green Lantern would be such a randy piece of work?

1974's The Sex Thief came along at a time when cheeky British sex comedies were in their prime. It was a genre created in response to the increasingly graphic films coming out of Europe, which gave foreign films the slightly risque reputation they sometimes still have today.

While Campbell would go on to direct two James Bond films (Goldeneye and Casino Royale), it was clear from the outset that he had a soft spot for the series, and imbued his hero, a swarthy jewel thief lothario, with a bit of Bond's trademark swagger and charm. 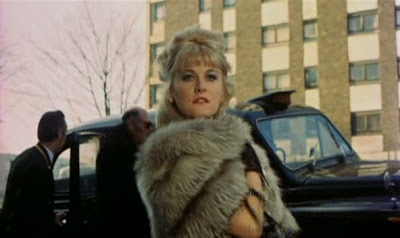 The film could have used a bit more of Bond's adventurous spirit, however, because it's little more than soft core pornography. The jewel thief breaks into women's houses, and rather than stealing jewels ends up ravishing them all night long. As his legend grows, women actually begin baiting him to sneak into their rooms for a night of unbridled passion. It's a pretty standard porn "plot," and Campbell attempts to add some decidedly British cheek to the affair, but the endless sex scenes become tiresome after a while. British sex comedies produced a few jewels at their height, Val Guest's Au Pair Girls (which was also given a Blu-ray release by Kino just last year) among them.  But The Sex Thief  quickly wears out its welcome.