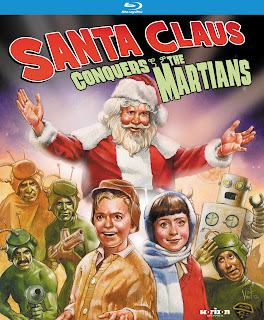 There are few films in the history of cinema more infamously bad than Santa Claus Conquers the Martians. Made famous by Mystery Science Theater 3000, the film has managed to endure since its release in 1964 due to its sheer awfulness. From the cardboard sets, to the threadbare costumes, to the patchy makeup, to the campy performances, Santa Claus Conquers the Martians somehow manages to get every element of production hilariously wrong.

Even the story is a mess, which even if taken as a children's fantasy wouldn't make much sense (one wonders why the makers of the similarly themed Mars Needs Moms didn't see this as a red flag).

Something is wrong with the children of Mars. All they do is sit around watching television broadcasts from Earth. Perplexed, the Martians ask an elder how to lift their spirits, and are told about the joy of Christmas that Santa Claus spreads on Earth. 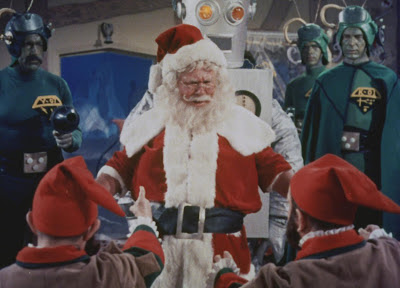 So the aliens do the most logical thing they can think of - head to Earth to kidnap Santa. If Santa can bring Christmas cheer to the children of Earth, why not Mars? Armed with the world's clunkiest space ship that makes the effects in the original Star Trek TV series look like Avatar, the Martians descend on Earth, causing mass panic, and take Santa along with two children back to Mars. While most of the Martians are friendly, one in particular, Voldar, thinks the children of Mars are just fine thank you very much, and sets out to put an end to Santa forever. But the jolly old elf has a few tricks up his sleeve, and along with his newfound friends, puts an end to the Martians' plot just in time to save Christmas for both planets.

It's all patently ridiculous, made without any regard for basic story structure or narrative logic, resulting in an experience that is more akin to an acid trip than a movie.The presence of a truly bizarre "Hooray for Santa Claus!" jingle (complete with sing-a-long) doesn't help matters in that regard. Since it's in the public domain, the film has long been available on cheap, substandard DVD, and Kino has made the film available on Blu-ray for the first time through its Horizon label. The film still looks awful, because no amount of HD could ever make a film with such shoddy source elements look good, but the actual quality of the Blu-ray transfer is a a marked improvement from bargain bin DVDs made on the cheap. If there is such a thing as a definitive release of Santa Claus Conquers the Martians, this is it. Although it does benefit considerably from the Mystery Science Theater 3000 commentary, which is not included here, there's still quite a bit of campy entertainment value. For those with a taste for bad movies, especially unintentionally hilarious ones that take themselves completely seriously, you can't do much better than this.