Blu-ray Review | "The Man Who Knew Too Much" 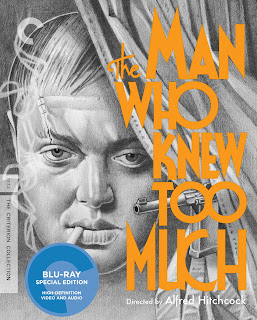 Before Alfred Hitchcock was "Alfred Hitchcock," the master of suspense as we know him in America, he was a director of smart British thrillers that would eventually pique the interest of Hollywood. The best of Hitchcock's British productions is arguably The Lady Vanishes (which Criterion also released on Blu-ray for the first time last year), although a defense could certainly be mounted for The 39 Steps as well. Lesser known, perhaps, is his 1934 version of The Man Who Knew Too Much.

It's a famous title, certainly, but more so for Hitchcock's own 1956 American remake starring James Stewart and Doris Day (with its Oscar winning song, "Que Sera Sera"). The original, starring Peter Lorre in his first English speaking role, is a lesser known effort, but a superior one - an often overlooked jewel from Hitchcock's early days.

Clocking in at a brisk 75 minutes (in contrast to the remake's more inflated 120 minutes), The Man Who Knew to Much is a lean and efficient thriller, showcasing Hitchcock's mastery of narrative economy. Not unlike The Manchurian Candidate, which wasn't released until 28 years later, the film is a paranoid conspiracy thriller about a couple who accidentally stumbles upon a clue to an elaborate assassination plot, only to find their young daughter kidnapped to keep them silent. Peter Lorre makes for a great villain, and his performance is even more extraordinary considering he barely spoke English at the time and learned his lines phonetically. In the annals of great Hitchcock set pieces, the climactic theater assassination sequence, and the prolonged shoot-out that ensues, is one of the master's most expertly crafted scenes. The build up to the assassination, accompanied by an original aria by Arthur Benjamin, is pure Hitchcock, and may be the best single moment in any of his early British sound productions.

The Blu-ray from Criterion, featuring a brand new, much needed digital restoration, is crisp and clear, a vast improvement over the many sub-par public domain copies that have dominated Hitchcock bargain bin collections. The most notable extra are audio excerpts from Francois Truffaut's famous interview with Hitchcock, which are absolutely essential for both casual fans of the director and hardcore cinephiles alike. It's an impressive set for one of Hitchcock's most unfairly overlooked accomplishments - a hidden gem in one of the cinema's most legendary careers.