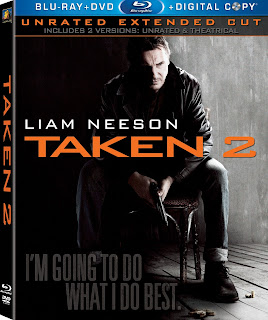 There's nothing quite like watching Liam Neeson running around the world killing people.  No one does it quite like Neeson, who has become something of our modern day version of a 1980s action hero, blasting his way out of any sticky situation with a scowl and witty retort.

Neeson's steely presence was the main reason for the surprise success and continued endurance of Luc Besson's 2008 hit, Taken. It should come as no surprise then, that someone somewhere would try to cash in on the original's success, hence the completely needless existence of Taken 2.

Director Oliver Megaton (Transporter 3) steps in for Luc Besson, and despite lots of flashy cinematography and frenetic editing, Megaton is just not the action craftsman that Besson is, and it shows in this film's disappointingly rote action sequences, that range from ridiculous to just plain silly. A rooftop chase through Istanbul is reminiscent of a similar, and altogether superior, sequence in Skyfall, which is almost a textbook on how to do modern action correctly.

Taken 2 opens on the funeral of all the people that ex-CIA agent Bryan Mills (Neeson) killed in the original film, as some new sneering villain vows revenge for family members he is burying. This time it's personal, and the target isn't just the daughter, but Mills' entire family. And despite Mills' very specific set of deadly skills, he finds himself and his ex-wife, Lenore (Famke Janssen) taken and held captive by a gang of vengeful thugs. He has a few tricks up his sleeve of course, and with the help of his daughter (taking his instructions over the phone, of course), escapes the clutches of the evil doers but is forced to leave the injured Lenore behind. In one of the film's most ridiculous scenes, Mills has his daughter set off grenades at their hotel so he can get his directional bearings during his escape, yet the consequences of randomly setting of grenades in a populated hotel for no good reason are completely ignored.

It is a scene that is completely indicative of Taken 2's absolute disregard of any kind of narrative logic. By the time Mills returns to rescue Lenore and dish out justice of the Neeson kind, the film has forfeited all credibility in favor of incoherently edited shoot-em-up fireworks. Megaton has visual flair to spare, but even Neeson's charisma seems dampened by the relative pointlessness of this film. It is the epitome of a soulless cash grab, and offers to real reason for existing other than watching Neeson shoot people. Alas, even that has lost some of its luster amid Megaton's hectic style, making me long for the relative subtlety of Dirty Harry. The Blu-ray presentation is handsome enough, and Megaton does give us some gorgeous wideshots, but they are in service of such an insufferable film that it all adds up to naught. Stick with the original. It's really all we needed in the first place.