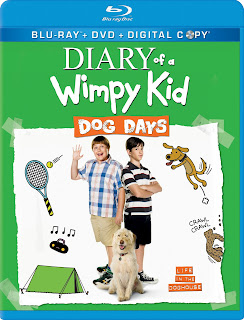 I haven't seen the first two Diary of a Wimpy Kid films. They just weren't on my radar, and I never saw much of a point in reviewing them. So I came to the series' third entry, Dog Days, with a completely clean slate. So despite the fact that I am nowhere near its target audience, and it's clearly not the kind of film critics were ever meant to pay attention to, I fell for it, and fell for it hard.

Diary of a Wimpy Kid: Dog Days is the kind of film I would have loved as a kid, and to my great surprise, I loved it now. It's silly, the kids are occasionally awkward, it's completely outlandish, but then again so is childhood. And Dog Days absolutely exudes the strange, messy essence of childhood at every turn.

The wimpy kid of the title is Greg Heffly (Zachary Gordon), a kid faced with spending the summer with his dorky parents (a hilariously gung-ho Steve Zahn and Rachael Harris), and his antagonistic older brother, Rodrick (Devon Bostick). 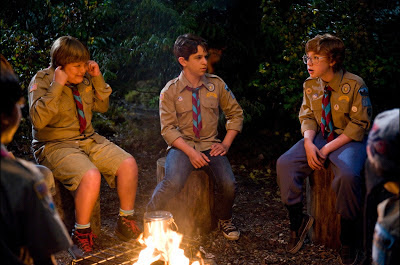 Unwilling to face actually being seen in public with his embarrassing family, he cooks up a scheme with his best friend, Rowley (Robert Capron), to pretend to have a job at the local country club (of which Rowley's family are members), while he tries to get  date with his crush, Holly Hills (Peyton List). When Rodrick gets wind of his plan, however, he blackmails Greg into bringing him along, causing all sorts of complications along the way. On top of all this, Greg's dad is constantly looking for bonding opportunities, and signs them up for a scouting trip that quickly devolves into a competition between dads.

It's not exactly a strong plot, and it covers familiar territory - familial bonding and things of that nature. But it's all done with such a refreshing sense of guileless innocence. It doesn't feel like the manufactured studio product it very well could have been. These kids clearly had the time of their lives making this, with its gee-whiz sense of humor and clever integration of animation connecting the characters to their hand drawn literary counterparts. Fox's Blu-ray treatment is pretty standard for this kind of kid fare, but really this is a perfect film for families to enjoy together. No great art, this. But it will almost certainly put a smile on your face.