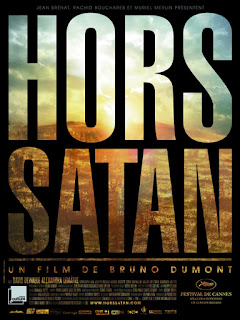 The spirit of Carl Th. Dreyer seems to hover over Bruno Dumont's Hors Satan. From its almost eerie calm to its lingering spiritual implications, there were times when I felt as if Dumont were actually channeling Dreyer himself. He even pays direct homage to Dreyer's Ordet in a clear visual nod near the film's end (which, in turn, inadvertently evokes Carlos Reygadas' Silent Light).

Hors Satan is a much more opaque film than Ordet, but that's not without reason. Dumont's films are less overtly spiritual than the work of Dreyer, but no less profound for that. As such, Hors Satan plays its cards close to the vest. It is a deeply introspective film, a kind of puzzle of the soul, a film with multiple interpretations that depends largely on the eye of the beholder and their perception of its central character; a nameless drifter who wanders into a provincial town in the French countryside and forges and unusual friendship with a troubled young girl. 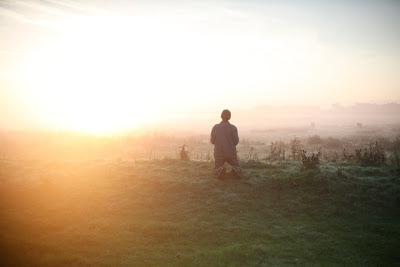 On the surface the man is devoutly religious, kneeling to pray, palms outstretched, every day to the rising sun. It is as if he is thanking God for the very day itself, and his existence is the most precious gift of all. But all is not as it seems with this stranger, who very early on brutally guns down the girl's abusive stepfather in an act of protection. The girl is grateful, and, as it turns out, the kind of person who feels more pain at the death of an animal than the death of a person. When the man accidentally shoots a deer, the girl is distraught and lashes out at him. When he attacks people who are somehow bothering her, however, she barely bats an eye, and embraces him as a protector. But is he a savior, or a devil? That is the central conundrum of Hors Satan, and a question that is never fully answered.

In English the title means Outside Satan, which hints at a darker motive behind the stranger's actions, and his murderous tendencies seem to indicate something evil indeed. But he counters them with something strangely pure, even miraculous. The girl is drawn in, seduced by his mystery. When she makes passes at him, she is instantly rejected. He is almost asexual, despite her advances, and yet he displays a jealousy like that of an angry lover. Locals are also drawn to him, including a widow whose sick daughter he cares for on a regular basis. But even this has its dark undertones. Sometimes evil presents itself to us in innocuous packages, and that I think is key to Dumont's enigmatic film. 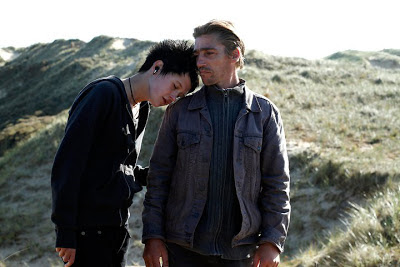 The world is not black and white, and Hors Satan exists squarely in a world of shades of gray. We are at first appalled by what appears to be a cold blooded murder of an innocent man, only to discover he was an abusive father, and the murder seems somehow justified. Each act of evil from the stranger could be explained away somehow. We as the audience, much like the girl, find ourselves at constant odds over his actions. That's the most dangerous form of evil, the kind that isn't obvious, the kind that could be somehow justified from a certain point of view. These ambiguities can often mask true evil, and this lost girl, alone and looking for something to hold on to,is the perfect for a devil looking to lead someone astray, no matter how imperceptibly.

Shot on the Côte d’Opale in the French countryside near the English Channel, Hors Satan has an almost otherworldly, even divine beauty. Dumont, with the help of cinematographer Yves Cape creates some indelible images that stand in stark contrast to the stranger's deeds. But evil, as we all know, is sometimes deceptively attractive. Dumont draws us in with long, languid takes, unblinking, all seeing, yet completely unyielding. The film is a neverending series of mysteries that even with its uninterrupted, Dreyer-like camera movements, reveals so little while hiding nothing. He allows us to see the full picture, but the full picture is rarely ever the whole story. The devil is in the details, and in this case the devil may not be the devil at all. That's the fascinating question that drives Hors Satan - if we met Satan face to face, would we recognize him? The implications linger long after the film is over, and while it occasionally seems to be doing more meandering than exploring, Dumont provides us with much to contemplate, a hallmark of any great film. Evil is often so pronounced in cinema that it is unnerving to confront something so ambiguous. And while it may not deal in the same kind of direct spirituality for which Dreyer was known, I think he would be proud.