Blu-ray Review | "Won't Back Down" 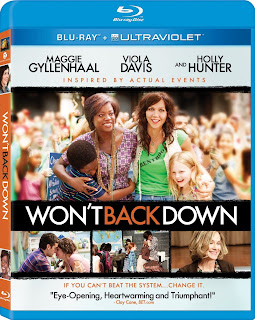 Daniel Barnz' Won't Back Down is the kind of earnest, "inspirational" drama that audiences tend to love and critics love to hate.

But it didn't really make a big splash with either group when it was released in theaters last fall, and it's not hard to see why. It may be inspired by actual events, but it's such a heavy handed mess that it's hard to get on board with the film's overt sermonizing and saccharine emotionalism.

There is a place in the world for this kind of sincere, unironic filmmaking, but despite some fine performances by Maggie Gyllenhaal, Viola Davis, and Holly Hunter, Won't Back Down just feels sloppily thrown together. The biggest problem is the ham-fisted, Gandhi quoting script ("Be the change you want to see!"), which feels more like a letter to the editor from an irate parent than an anything that any real person would actually say. It's a film of bumper sticker emotions, rather than ideas that might actually be helpful. 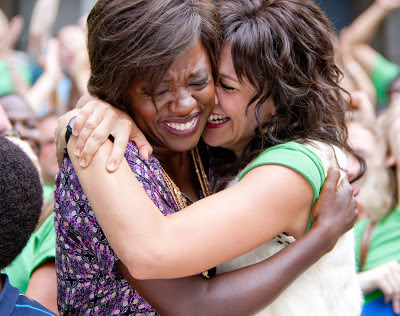 Gyllenhaal and Davis make the most out of their one dimensional roles, though. Gyllenhaal as a crusading mother whose dyslexic daughter has been left behind by a failing public school, and Davis as a teacher being crushed under the weight of an unforgiving system. When the two team up to try and take the school back, they face almost impossible challenges, from cartoonishly evil teachers to vindictive administrators and teachers union goons. I think it's a bit irresponsible for the film to so brazenly lay the blame for the sad state of our public schools at the feet of substandard teachers and never-ending bureaucracy (which is admittedly a problem) rather than acknowledging the culpability micromanaging and overprotective parents in the equation. But the film clearly has a feel good message it wants to achieve and isn't particularly interested in any kind of thoughtful approach to a very real issue. It's all about emotional, gut reactions.

That's not even accounting for the sloppy construction. At one point, Holly Hunter is talking to Gyllenhaal with her back turned to the camera. She stops talking, but her head continues to move, and Gyllenhaal is clearly still listening to something, but the dialogue was removed in favor of a dramatic pause. There are a few shining moments here and there where the film really does have an impact - the opening and closing scenes featuring the young daughter of Gyllenhaal's character are especially moving in their simplicity. But otherwise the film is just trying way too hard. It lives up to its awkward title in terms of emotional shamelessness, and the disc adds insult to injury with some equally treacly, overly simplistic special features - "A Tribute to Teachers" and "The Importance of Education" that do little to illuminate the issues the film raises. Its characters deliver speeches and seem to be talking in political talking points, and only in the opening and closing does it ever achieve any kind of real human feeling. Education is an extremely important issue in America, and there is certainly a dialogue to be had about the causes and solutions for the problem. Unfortunately, Won't Back Down isn't it.