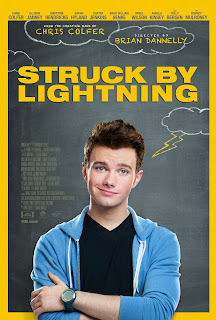 Chris Colfer might well prove to be the biggest breakout from the Glee phenomenon. While the show isn't quite the event that it once was when it first started, Colfer has proven to be one of its strongest assets, racking up Emmy and Golden Globe nominations for his turn as gay high schooler Kurt Hummel.

As is often the case in Hollywood, gay actors tend to get pigeonholed into playing gay roles, but if his new film, Struck by Lightning, is any indication, Colfer is refusing to be put into a box. Not only does he star in the film, but he wrote the screenplay as well, showcasing a previously unseen side of the actor that cements him as a creative force to be reckoned with.

There is a wry quality to Colfer's writing that is reminiscent of Tina Fey. While the film's fledgling distributor, Tribeca Film, doesn't have the same resources for a wide release as the major studios, it's easy to see Struck by Lightning becoming a word of mouth hit on DVD as the next Mean Girls.


Like that film, Struck by Lightning is set square in the middle of a small high school in a small, dead end town. Colfer stars as Carson Phillips, who is struck dead by a freak bolt of lightning in the film’s opening minutes. Flashing back to the weeks leading up to his untimely death, we find that Carson is an ambitious senior whose position as the editor of the school newspaper and president of the journalism club hasn't gotten him anywhere with his shallow peers. Even his school guidance counselor (The Office's Angela Kinsey) doesn't quite know what to do with a student so driven to succeed. Armed with a dream to study at Northwestern and work for the New Yorker, Carson discovers that good grades and extracurricular activities just aren't cutting it for college admissions anymore. So he sets out to start a literary magazine that will help him to get into the college of his dreams.

Motivating his decidedly un-motivated peers, however, proves to be much easier said than done. But after discovering one of the school's most popular guys in a bathroom stall with the president of the drama club, Carson discovers his path to success - blackmail. Armed with dirt on almost the entire school, Carson starts putting together a literary magazine filled with the hopes and dreams of the entire student body - a task that will ultimately prove to be his greatest success, or his complete undoing.

Colfer's acerbic wit consistently buoys the film above the typical pitfalls of "quirky" indie comedies, but he also wisely surrounded himself with a terrific ensemble, including the always entertaining Rebel Wilson as Carson's awkward, plagiarist best friend, Malerie, Allison Janney as his pill popping mother, and Dermot Mulroney as his long absent father. It is that relationship with his mother that makes up the film's strangely affecting core. Even amid the plentiful humor and razor sharp, destined-to-be-quotable banter ("I hate you more than I hate the Holocaust!"), Struck by Lightning packs a surprising emotional punch.

There are certainly familiar elements at play here, but what makes the film such a breath of fresh air is how refreshingly not self absorbed it is. Colfer's writing displays a confidence that eschews the navel gazing irony that is so typical of his generation. The result is a completely winning film, the kind of smartly written indie comedy that so rarely separates itself from the self consciously quirky pack. Struck by Lightning is a film with genuine heart that has the potential to garner a new cult following. And as for Colfer, he's no longer just a talent to watch in front of the camera, but an imposing creative force behind it as well. There's clearly more to him than just "the kid from Glee."