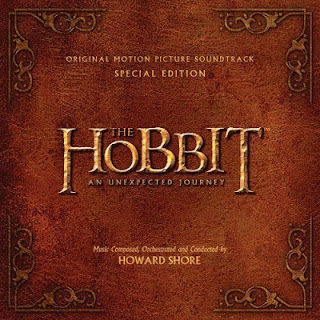 Shore's work on the Lord of the Rings is arguably one of the greatest achievements in film music in the last two decades. He created an entire world through music just as much as Peter Jackson created an entire world on film. So to return to that world after composing such a towering work must have been an intimidating task indeed.

The action of The Hobbit takes place 60 years before the events of The Lord of the Rings, and Shore's score certainly reflects a younger feel. Here is where many of the themes we will hear in the Rings scores are born, and Shore slyly develops them with a fresh eye. Their statements are important, instantly recognizable to fans of the franchise, but he weaves them into the score as if we are hearing them for the first time.

The album begins with "My Dear Frodo," which plunges us directly back into the world of the Shire, opening with a new theme for Bilbo Baggins, this story's central protagonist, before segueing into the familiar "Concerning Hobbits" material first heard in The Fellowship of the Ring. This sets the stage for the score to come; warm and familiar, like the embrace of an old friend. Shore then hits us with some new action material for the dragon Smaug's siege on Erebor, told in flashback and setting up this trilogy's central conflict. The Shire material is again revisited in "Old Friends," which also introduces a smoky, meandering theme for Gandalf the Grey. It's an almost playful motif that reflects Gandalf's more mischievous side, as he interrupts Bilbo's idyllic Shire life, whisking him away on an adventure.

The score's main identity is introduced in "Misty Mountains," first played as a haunting Dwarvish song retelling the tale of their lost kingdom. While Shore himself did not compose the theme (which was actually composed by the group, Plan 9, for the dwarves to sing), it dominates the score, and Shore makes it his own. It replaces the iconic Fellowship theme as the heroic identity for The Hobbit, representing the epic quest of our heroes. It's an appropriately booming theme that, while perhaps a tad overused in the film, stands strongly beside Shore's own themes from the series.

Shore mixes the new material for Bilbo with the music for the Shire in the most blatant way in "The Adventure Begins," which carries Bilbo away from his home, representing a fundamental change in his character.  Familiar themes begin creeping into the score in "An Ancient Enemy," as Shore hints Sauron's theme from Lord of the Rings, as well as the rhythmic Nazghul music at the first appearance of the Witch King of Angmar. A gorgeous new choral theme for the wizard Radagast is introduced in "Radagast the Brown, some of the best new material in the score, and a playfully threatening piece accompanies the trolls that try to eat Bilbo and company in "Roast Mutton."

The second disc gets off to a familiar start with the introduction of the Rivendell theme in "The Hidden Valley," which hasn't really been given many variations throughout the series. One of my favorite moments in the score, however, comes in "The White Council," a veritable feast of subtle thematic reprisals from the Rings films. This is what I love the most about the intelligence of Shore's thematic composition. He manages to incorporate the themes for Galadriel, Sauron, along with a statement of the Isengard theme to accompany the first appearance of Saruman. While not yet a villain, the appearance of his menacing theme foreshadows the evil to come, while Sauron's material skirts around the edges of the cue, hinting at a dark, unnamed presence making its way back to Middle Earth.

Shore once again flexes his thematic muscles in another one of the score's powerhouse cues, "Riddles in the Dark." Here Shore introduces two major identities for Gollum, and most importantly, the One Ring. The History of the Ring theme, which accompanied the opening title of the Lord of the Rings films, makes its debut here as Bilbo discovers the Ring after it is dropped by Gollum. Things shift into high gear in "Brass Buttons," one of the album's action highlights, which features the thundering material for the goblins (which recalls "The Bridge of Khazad Dum" from The Fellowship of the Ring), and the debut of Gollum's Pity theme as Bilbo spares his life, which often accompanied him during The Lord of the Rings. This is where the album diverges greatly from the film. The material found in "Out of the Frying Pan" and "A Good Omen" was mostly replaced by previously recorded material from Lord of the Rings (including an incongruous statement of the Nazghul chant at a very pivotal moment that has nothing to do with the Nazghul). "A Good Omen" introduces the theme for Smaug the dragon, which does not actually appear in the film (the moment is left silent instead), leaving one wondering if the theme will continue into the later scores or if it will be dumped entirely.

Overall, The Hobbit is a much lighter affair than The Lord of the Rings, and Shore's score reflects this, even if for the most part he treats it with the same level of musical gravity as the previous films. There is less going on thematically than his previous work for the film, but that's also understandable given that most of the themes from the original trilogy need no reprisal here. Shore is giving birth to the familiar musical world we know, and he succeeds marvelously. Even the end credit song, "Song of the Lonely Mountain," stands strong against the three wonderful end credit songs from the Lord of the Rings films, even if it is lighter in tone. This is the score of the year, as well it should be. Shore continues to shock and awe with the sheer size and complexity of his compositions, and he has gotten this new trilogy of films off to a smashing start.