DVD Review | "A Night To Remember" 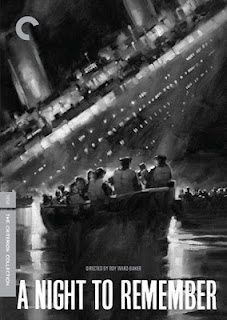 100 years ago today, the RMS Titanic struck an iceberg and sank into the icy depths of the North Atlantic two and a half hours later at 2:20 AM on April 15.

At that moment, a legend was born, and the Titanic sailed into history as one of the most enduring and endlessly fascinating disasters of all time.

Perhaps it is the personal stories - the band playing until the very end, Ida Strauss refusing to leave her husband, Isidore, the ship's builder, Thomas Andrews, frantically throwing deck chairs into the sea to serve as flotation devices. Perhaps it is the neverending series of "if onlys" that surround its sinking - if only there had been enough lifeboats, if only the crew had heeded repeated ice warnings, if only the Californian hadn't shut off its wireless, if only the ship had rammed the iceberg head-on rather than grazing it, the list goes on and on. But whatever it is, the Titanic has carved out a permanent place in the popular consciousness, and nowhere is that popularity more apparent than in the multiple cinematic retellings of the story that have been appearing almost as soon as the great ship went down.

The most famous of these is, of course, James Cameron's Titanic, a sweeping epic that focused on a fictional love story set against the backdrop of the disaster. Cameron's film was meticulously researched, and features quite a few real characters, but of all the Titanic films, perhaps none is so painstakingly accurate as Roy Ward Baker's 1958 docudrama A Night to Remember. Coming out several years after Fox's soapy Titanic, starring Clifton Webb and Barbra Stanwyk, A Night to Remember sought to offer a more realistic depiction of the event. Based on the book of the same name by Walter Lord, the film follows the Titanic's true stories, giving a blow by blow account of the sinking from the point of view of different passengers and crew members who are all based on real people.

There is no main character, per se, but the action does tend to center on 2nd Officer Charles Lightoller (Kenneth Moore), who was the highest ranking officer to survive the sinking, and it is his testimony that serves as the basis for much of what we know about the disaster. Baker deftly weaves these real life tales to provide as wide-ranging and complete a picture of the sinking as possible. Unlike most Titanic dramas, Baker wastes no time on the events leading up to the fateful collision with the iceberg. That event occurs 30 minutes into the film, and the rest of the running time is devoted almost entirely to the sinking.

While Cameron may have had access to more facts and information regarding the sinking than Baker (the wreckage had not yet been discovered in 1958), Baker's adherence to fact is both a positive and a negative. It tends to lead to a more clinical, by the book, unmistakably British vision, but it also a more immersive experience. By dispensing with a fictional story to distract from the real life drama, A Night to Remember stands apart from its Titanic brethren by sticking solely to the facts. By the time the Titanic is in its death throes, the lack of a central character no longer matters, and the real human stories of the ship come to the fore. While the special effects may not hold a candle to the Academy Award winning work in Cameron's film, they're still quite impressive given the period, and Baker manages to infuse the film with an unflagging sense of authenticity.

Comparisons to Cameron's Titanic are naturally inevitable, but it all honestly it's a bit unfair. Both are very different films with very different goals, and both succeed on their own terms. For fans of Cameron's film, A Night to Remember may come as a bit of a jolt, considering just how much of the same ground is covered. It's clear Cameron drew some inspiration from Baker in regards to the look of his film, as well as the paintings of Ken Marschall. But Baker's fact based approach feels like as close as it is possible to get to the real thing. His sense of verisimilitude and the striking black and white cinematography (as well as the earnest performances) make for a memorable and moving experience. 100 years later, the Titanic disaster still continues to haunt a fascinate us, and for as long as it does, A Night  to Remember will endure as one of the quintessential Titanic films.