Adam and Dog is the story of how the dog became man’s best friend. Taking place in the Garden of Eden, Dog discovers Adam and they quickly form a tight bond. When Eve appears, Adam’s attention drifts away from Dog and his unconditional love and devotion. It’s an incredibly moving film especially for the dog lovers out there. Director Minkyu Lee is a former animator for Disney who worked on their 2009 film The Princess and the Frog. This is his debut and even though the animators involved are from Disney, Pixar, and Dreamworks, this is a completely independent production with no major studio involvement whatsoever and I find that so very refreshing. Lee crafts such a beautiful atmosphere and it’s all done in hand-drawn animation. It’s the longest of the nominees in this category, but there is a lot going on here. These are the first days of Earth, and Dog is seeing the sky for the first time, grass for the first time, a squirrel, a hippopotamus, water, and finally Man, whose first encounter is an indelible moment. It just has an otherworldly charm to it and an innocent childlike quality. This animated dog is so loveable and when Adam turns his shoulder on him, it feels like we’ve been punched in the gut. I got very attached to this one because it’s easily the best of the bunch. 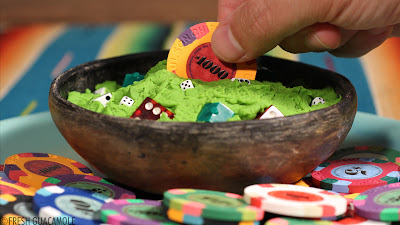 Director Adam Pesapane – known as PES to most people, especially on the internet – delivers yet another wildly inventive short film. “Short” is most definitely the key word in that sentence because Fresh Guacamole barely runs for a whole two minutes, but inside those two minutes is an array of genius animation techniques. It’s short, funny, incredibly memorable, and I could have watched this go on for hours. It’s vastly different from the other films in this group because there isn’t a story or characters, it’s just a quick exercise in quirky animation. Guacamole is another installment in PES’ short film series in which he utilizes household objects that bare an uncanny likeliness to certain foods and turns them into ready-to-eat dishes. In 2008, PES made the short film Western Spaghetti (using the same animation style as Guacamole) which has now reached more than 10 million views on YouTube. Starting out as an internet sensation, PES is now an Academy Award nominated filmmaker and a great success story. 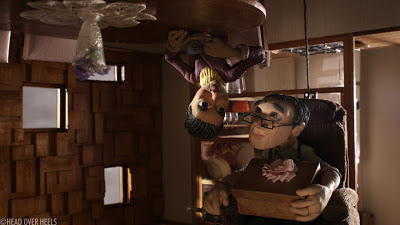 Considering this is a student film from the UK’s National Film & Television School, it’s an amazing accomplishment. The film deals with an older couple living their lives in a house that is traveling through the air. They have grown apart so much that one lives on the floor and the other on the ceiling. The man tries to mend their relationship one day, but is unsuccessful in his attempts and sends their whole universe off-kilter. It’s an incredibly emotional domestic drama that shows how hard it can be to live with the same person, but how much you learn to appreciate their company. The major standout here is the incredible set design. The house they live in is incredibly realized with so much detail going into every corner. The way they navigate on separate planes, the way the furniture is laid out on the floor and ceiling, the way the mechanics of the house work - it’s all so very clever. The film also has an incredible emotional ending that kicked me in the gut it was so touching. I won’t lie, I shed a few tears. Reckart took a page from Pixar’s books and gave us an tearjerker involving a senior couple. I dare you to not get choked up at the end. A beautiful film. 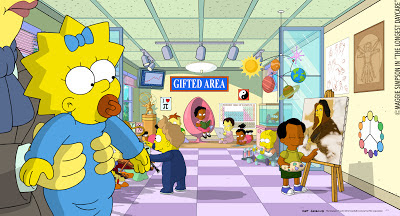 This cute little Simpsons short – which appeared alongside Ice Age 4: Continental Drift in theaters – follows Maggie Simpson’s afternoon at daycare. It’s simple fluff, but when you think about it, there’s actually quite a bit going on here that is smarter than its surface image implies. I’m not surprised that there’s a lot of smart references in this, it is The Simpsons after all, but I am amazed that they tried to fit so much in a four minute short. This is all fun in the end – especially with that super cute final scene – but there’s a lot being said (or at least alluded to) about the education system, intellectual progress, and evolution. I could be giving this film too much credit, but there is more I disliked about it. For instance, I found the animation a little off-putting. Everything seemed out of proportion and not scaled properly. I know we’re in a baby’s world and it’s supposed to seem like a big, scary place around her, but it felt sloppy. Ultimately, I think this one is the least memorable of the bunch that is nominated. It’s cute, but the ideas it has went unexplored and would perhaps better suit a full episode of the television show. 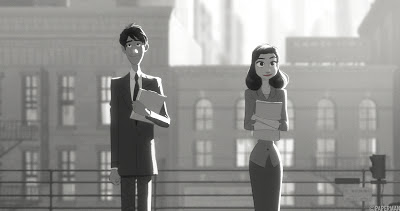 Paperman is the first short from Disney to accompany a feature film theatrically since 1990. A long wait, but they managed to produce a charming little film. Originally released alongside Wreck-It Ralph, the film runs a mere six minutes, but manages to elicit a big emotional response. However, I am convinced Disney took the idea for this from a short film I saw a couple years back called Signs by Patrick Hughes. Nevertheless, it’s still a great achievement in animation. The story deals with an office worker who notices an attractive woman at the train station, but before he gets the chance to speak to her she disappears. When he gets to work he notices the same woman in the building across from his and tries to get her attention by throwing paper planes to her. It employs the classic boy-meets-girl / chance encounter formula, but with an enjoyable ending that puts faith in fate and chance. The entirety of the film is in black and white and done in pantomime giving a classic feel to the picture which marvelously blends 2D hand-drawn animation and 3D computer-generated animation. If it wasn’t for that live-action short I saw a few years back, I would say this is incredibly inventive, but the similarities deter me from higher praise.