The Decline of Western Civilization

My girlfriend and I went to see Kathryn Bigelow's Zero Dark Thirty tonight. It was the first time I had been to a commercial film screening in months, having spent so much time in press screenings over awards season.  But I missed my screening of ZDT, so I was anxious to finally catch up with it. 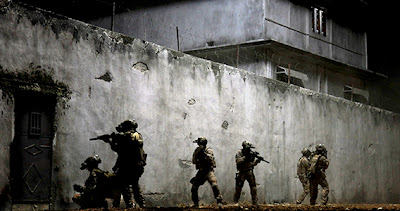 It wasn't until we settled down in our seats that we realized we were sitting next to a kid who was around eight years old. Eight. Years. Old. There's really no excuse for a parent to bring a kid that young to an R-rated film, especially one of such moral complexity as Zero Dark Thirty, let along a whole brood of them, because clearly this family couldn't find a babysitter and brought all three of their young children.

Of course, the children were very confused by much of it, asking questions occasionally, but were surprisingly well behaved for most of it. But how is a child supposed to process the events of that film? I can't help but think, though, that their view of it will probably be more developed than those critics who have ridiculously claimed that the film is pro-torture for its honest depiction of enhanced interrogation techniques during the hunt for Osama Bin Laden.

We do not live in a black and white world, we live in a world colored in shades of gray, and the film's clear eyed exploration of the circumstances that led to the capture of Osama Bin Laden exemplifies that. Glossing over the film's moral ambiguities indicates a narrow worldview and a complete misunderstanding of the cinematic language. The world isn't that simple, and neither is this story.

Although there aren't many gray areas when it comes to bringing eight year olds to movies like this. Thank you, random guy in Boone, NC for reminding me why I avoid commercial screenings whenever possible. I have an alternate choice, but it's easy to see why so many people who don't have the access to screeners and press screenings that I do are staying home rather than going to the movies. When you pay $10.50 for a ticket, you don't expect to be sitting next to a chattering child in a movie clearly made for grown-ups.
Email Post