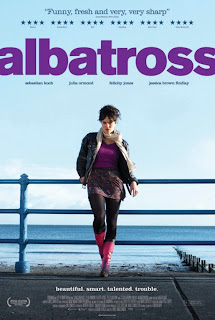 Somewhere along the line something went very, very wrong with Albatross. Not that the ingredients were ever particularly promising, but the final result reeks of such indie laziness and naivete that it feels like a kind of prototypical indie film - the template from which all Sundance hits are built.

The film centers around a troubled young girl (is there any other kind in films like this?) named Emila Conan Doyle (yes, related to the Sherlock Homes author), an aspiring writer who takes on a job at a scenic coastal bed and breakfast. The hotel is run by Jonathan, a famous writer who wrote a hit book about the place and then faded into obscurity, struggling to write his follow-up against massive expectations, but mostly he just gets distracted by internet pornography. His mousy daughter, Beth, is more interested in books than real lire, but all that changes with the arrival of Emilia, who will soon change all their lives.

Beth becomes somewhat enamored with this enigmatic stranger, who is a kind of projection of the freedoms shes has never had. But Johnathan becomes enamored with her as well, and while he is mentoring her writing, the two begin a steamy affair right under his family's nose. Soon, this strange girl threatens to pull them all apart, even as she is trying to find her true self. 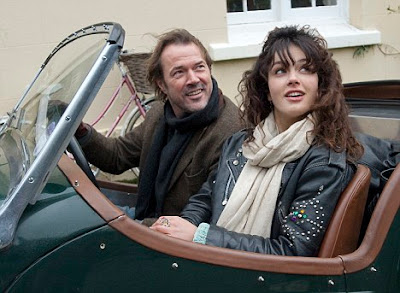 I'm sure that description was as painful to read as it was to write, because Albatross is little more than a collection of cliches and indie stereotypes. It's plot almost exactly mirrors that of American Beauty, a far more successful and less self-consciously quirky than Albatross, which almost seems to cling to its inspirations. There's nothing fresh or original about it, try as it may to charm and amuse. The real problem here is the script, which ham-fistedly tries to shove the titular bird into an awkward bit of symbolism near the film's end. Even the cast seems bored by the script's bland, connect the dots machinations and lackluster direction by first time feature director Niall MacCormick.

The film, and by extension its characters, are never more than the sum of their own quirks. It mistakes emotional immaturity for character development, leaving them as cardboard catchalls for overly simplistic issues. It just doesn't work on any conceivable level really. It almost seems to be a giftwrapped Sundance film as written and directed by aliens from a badly translated "How to Make a Hit at Sundance" manual. It's a bland, half-hearted attempt at humor and teenage angst that ultimately never gets off the ground. Perhaps, unlike the bird of its title, putting it out of its misery would have been a blessing.