Blu-ray Review | "I Don't Know How She Does It" 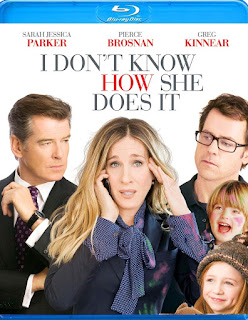 I Don't Know How She Does It is one of those movies that, on paper, looks like it just shouldn't work. Everything about it screams "unbearably cutesy romantic comedy," which I'm sure it will be to many people. It's one cliché after another, following a very familiar formula. But despite all of its familiar trappings, stereotypes, and uninspired accouterments, it's a surprisingly charming and nimble comedy.

I know, I should probably have my membership card in the Film Snob Club revoked for even watching this film, much less enjoying it, but there's just something about it that works in spite of itself. Rather it's the mostly game cast, the simple story, or the overall agreeable tone, I Don't Know How She Does It is a diamond in the rough amongst a field of shrill, banal films all jockeying for a female centric audience.

Sarah Jessica Parker stars as Kate Reddy, a working mother of two whose balance of her job at a high profile investment firm and her life at home nearly hits a breaking point when she is offered the opportunity of a lifetime - the chance to draft a new business proposal with one of the company bigwigs, Jack Abelhammer (Pierce Brosnan). Desperate to be both the perfect mother and the perfect employee, Kate soon finds herself stretched to her limits and in danger of losing both. It's completely standard rom-com plot, and while one could accuse it of having an overly simple view of gender roles, it actually handles its potentially touchy subject rather well.

It's easy to get into sticky territory when trying to analyze films that were never meant to be particularly deep to begin with. In the case of I Don't Know How She Does It, one could easily ask the question of why the mother has so much trouble juggling her career with her home life while the husband (Greg Kinnear) doesn't seem to, and why the mother is expected to be everywhere at once and all that. But the film is clearly meant for those overworked moms who wish to have both a career and a family, while poking gentle fun at stay at home supermoms. It never feels condescending or cheap, actually acknowledges male/female double standards rather well. While the overall tone and structure feels a bit like Sex and the City-lite (and not just because of Parker), it's actually kind of the perfect date movie. It's a fizzy, light-hearted concoction that goes down easy. It may not leave any kind of lasting impression, but as a pleasant, throwaway night on the couch with a bucket of popcorn, you could certainly do a lot worse.