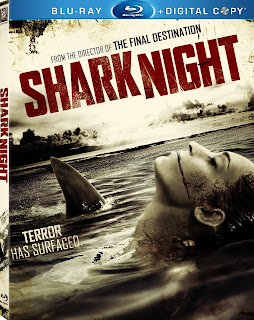 The cover of Shark Night proclaims it to be "from the director of The Final Destination," but a more appropriate film from schlock-master David R. Ellis' oeuvre may have been Snakes on a Plane. Yes, from the man that brought you Samuel L. Jackson fighting off motherfucking snakes on a motherfucking plane, comes a bunch of faceless teenagers fending off ruthless sharks during a weekend getaway at a lake house.

That's right, a lake house. These super sharks have somehow found their way into a salt water lake, and are out for some blood - in this case a group of college kids away for a weekend of sex and drinking. Each character is right out of the horror movie handbook. There's the virginal lead girl, her innocent love interest, the black guy, the slut, the vain frat boy, the list goes on. The locals are a group of threatening rednecks who naturally seem to be up to no good, and while no one seems to have any cell phone service anywhere on the lake, no one thought to install a phone in the lake house. 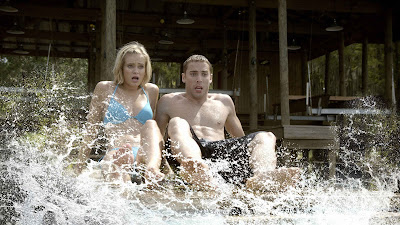 When it comes to a movie like Shark Night, it's pretty clear what you're getting right from the start. No one went into it expecting any kind of great art, but perhaps like Piranha before it, one might expect some agreeably goofy thrills. It's goofy all right, and at times even entertainingly so. But what I didn't expect from Shark Night is the surprisingly self-reflexive social commentary that courses through its B-movie veins. Shark Night, it turns out, has a point. What point could a film about CG killer sharks preying on scantily clad teenagers have, you ask?  It all starts with the film's rating, a frustratingly tame PG-13.  There is only one reason people go see movies like this, to watch people be maimed and eaten in horrifying ways. They want to squeal and cover their eyes and satiate their cinematic blood lust, then go home and go about their lives. Shark Night purposely denies that satisfaction at every turn.

There is blood in the water of course, and a severed limb here and there, but Ellis keeps the camera away from the goriest bits. Jaws (which the movie's opening scene pays homage to) is a more violent film than this. He teases the audience, making us demand more blood, then when we least expect it, slaps us across the face with an overt condemnation of audience bloodlust. Shark Night is never quite the film we want it to be, and surprisingly enough that's clearly a thematic choice. Ellis is actually critiquing us as we watch, and rather than build up to the "you want gore, I'll show you gore" bloodbath that was the climax of Piranha, Shark Night never allows us any such release. 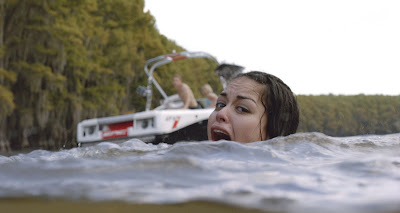 These themes likely went soaring right over the head of the target audience, of course. And one almost wonders, with such ridiculous surroundings, if it was intentional at all. But it's so clearly defined and blatant that it's unmistakable (subtlety, after all, is not exactly Ellis' strong suit). The film itself has some agreeably low-rent pseudo-exploitation pleasures to offer if you approach it with the right frame of mind, but it's too silly to be seen as any kind of serious critique of American culture and too caught up in its own thematic self-reflexivity to be a completely satisfying piece of junk horror. It's likely too tame to please teen audiences raised on a steady diet of Saw films, and too bland to please the under-13 set, sure to be thrilled to not have to sneak into the lastest horror offering at the multiplex.

The extras on the blu-ray are perfunctory at best, with the "Shark Night Survival Guide" doing little but offer an excuse revisit the film's uninspired kills (a term I'm sure the filmmakers would chastise me for using), serving the same purpose as the "Shark Attack! Kill Machine!" feature, which redundantly and rather hypocritically offers the viewer the option of jumping to their favorite kills in the film. No one comes to a film like this for the features anyway, and depending on what you're looking for, Shark Night may or may not deliver. For this kind of film, you're better off with Alexandre Aja's dark, decidedly crueler Piranha, but that's exactly the kind of attitude Shark Night frowns upon. It's hard to have fun when the film you're watching is admonishing you for doing just that.