In an interesting (and possibly brilliant) marketing move, the Weinstein Company is embracing anti-Thatcher sentiment in its campaign for Phyillida Lloyd's The Iron Lady. 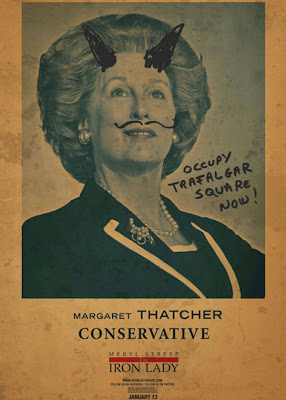 What makes these posters so clever is they aren't vilifying Thatcher directly, rather portraying the strong feelings often generated by Thatcher, and leaving the reaction up to the eye of the beholder. It's an especially interesting move considering how a-political the film actually is. I hope the subtlety doesn't go over people's heads, who may avoid the film thinking that it is a liberal hit-job on Thatcher, which it is anything but.

The film continues to stir up strong feelings in both liberals and conservatives, with many liberals calling it too sympathetic and many conservatives accusing it of being insensitive and soft. One's reaction to the film seems to be a direct reflection of the viewer's politics, even though I think the film transcends that. You can read my review of the film here.