Review | "The Flowers of War" 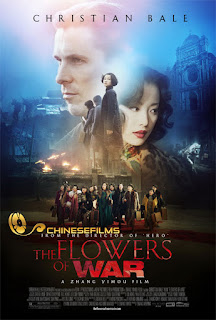 War is hell. Anyone who has ever been to one or seen a movie about one can attest to that. But in Zhang Yimou's The Flowers of War, war is not hell. In fact it's downright gorgeous. And therein lies the problem with the mixture of Zhang's trademark visual beauty and a story of such pain and horror as World War II's Rape of Nanking.

Zhang certainly tries to paint war as brutal and tragic; there is blood, death, and tragedy aplenty to be found in The Flowers of War. But like in most of Zhang's other films, it's all just so breathtakingly beautiful that it seems incongruous with the action actually taking place on screen. A woman is tied to a bed, raped, then stabbed in the heart with a bayonet by a Japanese soldier, and Zhang films the ensuing spray of arterial blood across the wall as if he was filming Jackson Pollock create one of his splattered masterpieces. There is something wrong, and almost indecent about the way Zhang seemingly fetishizes and exploits such atrocities, trivializing and reducing the Rape of Nanking to a series of poetic sacrifices and over the top images. 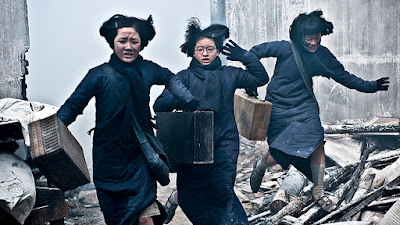 There are undeniably some powerful moments here. Zhang's prowess for creating memorable imagery doesn't completely overwhelm the film, and his frequent use of a massive stained glass window to create some interesting lighting is often quite striking. But the story is simplistic and the script is weak. The film centers around an American mortician named John Miller (Christian Bale) who is called to a Catholic church in the Chinese city of Nanking, which is under a brutal Japanese occupation, to bury the resident priest. When he arrives, he finds a group of young girls under the care of a similarly young boy, lost and frightened amid a bloody war with no one to care for them. A drunken lout, all Miller cares about is getting paid and getting out of there as quickly as possible, but the safety of the church is too attractive, so he takes up residence there with the children in hopes of one day being paid for his services.

Circumstances change, however, when a group of prostitutes show up at the mission seeking refuge from the occupation. Excited and intrigued by their presence, Miller seems more interested in carousing than helping, despite being begged to help them escape from Nanking. But when Japanese soldiers converge on the church looking to rape and pillage, Miller is forced to sober up and take responsibility for his young charges, who come to call him "Father John." And the man who once had no vested interest in the conflict must do everything he can to save his newfound family by any means possible. 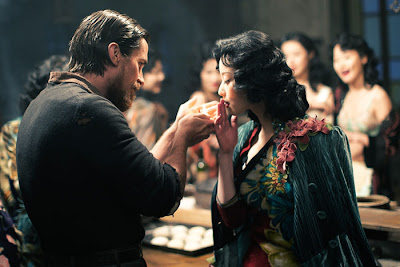 The story of Nanking remains a point of contention between China and Japan to this day, as evidenced by the release of Lu Chuan's City of Life and Death earlier this year. Despite being a Chinese production, Chuan's film dared to challenge the established narrative of the Rape of Nanking, portraying atrocities and humanities on both sides of the conflict. It was a less black and white take on the events (despite actually being shot in black and white), especially in comparison to Zhang's schmaltzy melodrama. City of Life and Death is undeniably beautiful, filled with searing black and white images that haunt and linger in the memory, but it is grimly beautiful. Chuan uses his poetic imagery to enhance his narrative rather than overwhelm it. It is beautiful in the same sense that Schindler's List was beautiful. It honors the sacrifices whereas The Flowers of War seems determined to exploit it for cheap emotional gain.

Christian Bale gives a strong performance, however, despite his character being saddled with a somewhat cheap and truncated arc, going from self absorbed jerk to saintly hero in almost a split second. And it's hard to deny that the cinematography, despite being somewhat problematic in context, is spectacular, not to mention Qigang Chen's lovely score, featuring violin solos by Joshua Bell and some truly gorgeous choral work. In the end, however, it all feels a bit like emotional pandering. I much prefer Zhang's more understated work in films like the hugely under-appreciated Riding Alone for Thousands of Miles, where he is able to take an essentially sentimental ending and embue it with a deep sense of humanity. In The Flowers of War, Zhang's visual sensibilities stand in stark contrast to the atrocities being displayed on screen, making for an often uncomfortable viewing experience. Zhang clearly isn't trying to glorify war, but he certainly comes close. It has a very Chinese sensibility of sacrifice and honor, but the end result seems to border on crassness. As a melodrama it's passable, solidly crafted entertainment, but one can't escape the nagging feeling that perhaps such ghastly atrocities shouldn't go down this easy.