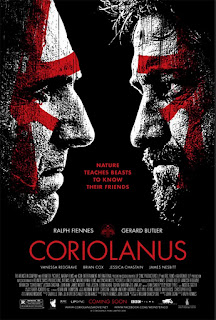 When the average moviegoer thinks about Shakespeare, they probably imagine dry, overly dramatic line readings accompanied by silly costumes and men in tights. The vitality and the urgency of Shakespeare's words have long been buried beneath stodgy interpretations and a fundamental misunderstanding of their bawdy, often violent roots.

Ralph Fiennes' Coriolanus is at once a thrilling repudiation of dusty interpretations and a fiery embrace of the true essence of Shakespeare's words. By setting the film in modern day but retaining Shakespeare's original text (much like Baz Luhrman's Romeo + Juliet), Fiennes, in his directorial debut, gets down to the gritty core of what Shakespeare was all about. Shakespeare's plays were raunchy, dark, violent works that were often considered lower class entertainment in their day. They played straight to the masses, and it is easy in this day and age to forget that. So ingrained in our consciousness is the idea of a lone actor stuffily crooning a Shakespearean soliloquy and so outdated is the language that their true timbre seems lost in the fog of time. In Coriolanus, however, that language has never seemed more powerful, or more modern. Fiennes himself stars as Caius Marius, also known as Coriolanus, a fierce Roman general who rules his country with an iron fist. It's citizens are cold, starving, and angry as the rich get richer and the poor get poorer. In a startling evocation of Occupy Wall Street, the citizens take to the streets in a rebellion that Caius swiftly and viciously crushes. The popular backlash against the government, however, is more than the politicians can handle, so they banish Caius, exiling him from Rome in order to save face in the eyes of the people.

Disgraced and angry, Caius turns to his sworn enemy, Tullus Aufidius (Gerard Butler), and offers him his life. While his followers are wary, Tullus welcomes him with open arms, and soon Caius is as strong an asset to him as he ever was to Rome. When Tullus turns his sights on taking over Rome, Caius sees his chance to exact his revenge upon the people who betrayed him, even if his own family stands in his way. 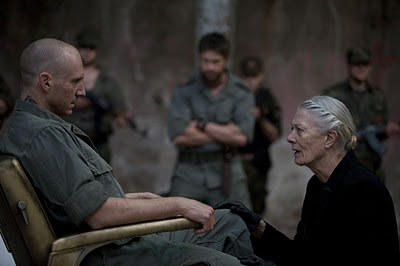 Coriolanus may be one of Shakespeare's lesser known works, but it's also one of his darkest, and Fiennes doesn't pull any punches. He also assembled an impressive ensemble cast to bring Shakespeare's words to life as never before. In addition to Fiennes and Butler, Jessica Chastain (in one of her many 2011 roles) appears as Caius' wife, Virgilia, and Brian Cox has a memorable supporting role as the politician Menenius, proving that he is one of the world's foremost Shakespearean actors. Cox has a fundamental understanding of the underlying meanings and timbre of Shakespeare's text, and that mastery is clearly apparent here. However the real star of the show is Vanessa Redgrave as Caius' mother, Volumnia. Redgrave gives a towering performance as a classic Shakespearean manipulative, scheming mother. It's one of the the year's best performances by anyone, male or female, lead or supporting, and it's a shame that she wasn't awarded by her efforts with an Oscar nomination.

While setting Shakespeare in modern times is nothing new, Fiennes' bruising, brutal take is both refreshing in its honesty and true to the Bard's spirit. It's both accessible and faithful - a difficult tightrope to walk in today's world. This is Shakespeare as it was meant to be, the way it should be done - thrilling, epic, ferocious, and strikingly, almost eerily relevant. This is not something to be left on a dusty college library bookshelf to be forgotten. Thanks to Coriolanus, Shakespeare has come crashing forcefully, powerfully, into the present.