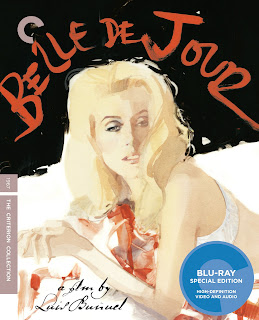 Luis Buñuel's Belle de Jour (1967) opens on what will become one of many of its heroine's sadomasochistic fantasies. A horse drawn carriage, accompanied by the incessant and ever louder sound of sleigh bells (a recurring signal that this is all imaginary), brings Séverine Serizy (Catherine Deneuve) and her husband, Pierre (Jean Sorel), to a secluded wooded area, where he forces her to get out of the carriage, ties her to a tree, and orders the carriage drivers to whip and finally rape her.

We realize this has all been just a daydream when Séverine snaps back into her almost laughably chaste reality - her bedroom the very picture of 1950s sitcom piety, with separate twin beds for husband and wife. This strange purity stands stark contrast to the dark eroticism of the opening scene. Séverine's life is nothing like her rich fantasy life - it is prim, sexless, and ultimately boring. She is in many ways the perfect socialite housewife, beautiful and stylish, but completely lacking in verve and excitement - a blank slate on which to project one's most depraved fantasies.

Things change for Séverine when she discovers the existence of modern day brothels, and decides to try her hand at being a high class prostitute.  So she visits the home of Madame Anais (Geneviève Page), whose high end brothel plays host to wealthy clients of all stripes. Séverine informs her that she can only work in the afternoons, and absolutely must leave at 5:00 every day, earning her the nickname "Belle de jour." Séverine is frightened at first, scared away by allowing her own fantasies into reality, but soon she becomes Madame Anais' most popular girl. But even as she slowly begins to give in to her deepest desires, she somehow remains distant, almost detached, giving herself over to pleasure but keeping her darkest fantasies at arms length.

As fantasy and reality begin to blur, however, she becomes in danger of losing herself completely. When a mysterious young client comes into her life, a guarded criminal with scars and metal teeth, Séverine's fantasy world threatens to clash with the real one. But those looking for a cautionary tale of sexual excesses should look elsewhere.  Buñuel was notorious for rejecting any kind of symbolic reading of his work, and Belle de Jour is no different. In fact it remains almost frustratingly unreadable, like its heroine. But that's part of its brilliance. Like Séverine, Belle de Jour is a blank canvas for the viewer to project their own fantasies, and any reaction to the film is meant to be more a reflection on the viewer than the film itself.

Séverine would go on to become one of Deneuve's most iconic roles, one that would serve as a template for many to come. Her role in Buñuel's take on repressed sexuality would come to define her delicate sensuality off of which she molded a career. In fact, one of the first thing one notices in Criterion's vibrant new blu-ray transfer is how the light plays off her silky blonde hair. The lush technicolor photography pops in all the right places, but it's interesting that how the little details like the sheen of Deneuve's hair can become so important and so intense due to the HD transfer. Blu-ray reveals such details in ways that we've never seen, and allows us to look at films in new ways. In this case, it's Deneuve's classic beauty that seems to radiate off the screen like never before.