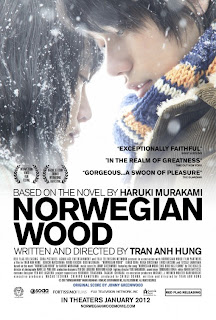 "Please always remember that I existed."

Those words, whispered by a teenage girl in Tran Anh Hung's Norwegian Wood, seem to perfectly sum up its wistful, melancholy heart.

Tran, the Vietnamese filmmaker behind 1993's Oscar nominated The Scent of Green Papaya (which received an excellent blu-ray release from Kino just this past year), has a naturally intoxicating style that seems perfectly suited to Haruki Murakami's popular novel about young love and teenage angst.

While not as singularly stamped with the director's personality like the considerably more idiosyncractic Papaya, Nowegian Wood does share a lot of thematic similarities with Tran's debut feature - most notably a pointed atmosphere of nostalgia for a time, and a love long past. 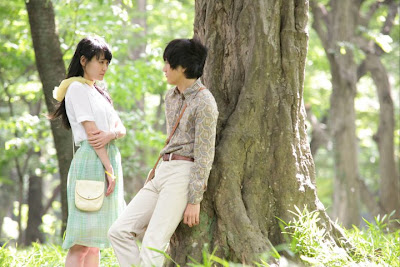 Taking its title from a Beatles song of the same name, Norwegian Wood is the story of Watanabe (Kenichi Matsuyama), who is reunited with his childhood friend, Naoko (Rinko Kikuchi) years after the death of their mutual friend, Naoko's former lover, who killed himself as a teenager. Never quite having recovered from the trauma, Naoko is a troubled young woman who lives at a kind of retreat, under the constant care of doctors, to help her recover from her painful childhood. On the cusp of turning 20, Naoko treats growing older with a mixture of nostalgia and trepidation. A new chapter of her life is dawning, but to what end? A year younger than her, Watanabe still has longer to go before truly leaving childhood behind. He falls in love with her, her enigmatic spirit and almost untouchable nature drawing him in.

But her trauma constantly keeps her at arms length, and his friend, Nagasawa, a free-wheeling playboy, introduces him to a whole new world of sexual freedom. It is through Nagasawa that he meets Midori, who is in many ways the complete opposite of Naoko. Soon Watanabe finds himself torn between two worlds, between the past and the present, the strange and the familiar, the new and the old. He will not only have to come to terms with his own desires, but with the very definition of love itself. 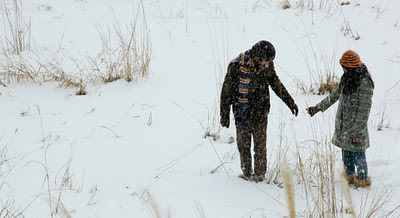 That dichotomy between a desire for the past and a need to move on serves as the core of Norwegian Wood, and Tran walks a fine line between honoring both. Beautifully photographed by Ping Bin Lee (In the Mood for Love), the film is at once a reflective ode to young love and a paean to a deeper, more mature love. Its characters long for both, caught between the past and the future, and the sense of yearning informs the entire film. It's nostalgic without being sentimental, romantic without being cloying. And while at times it may feel as if Tran is focusing on style over substance, it helps to remember that the style is often the substance. Tran enthralls us into a hazy memory of a love long lost, like misty eyed reflections on one's youth. It is in turn idealistic and brutally honest, the naivete of youth crossed with the wisdom of maturity.

Norwegian Wood has every bit the keen sense of time and place as The Scent of Green Papaya, and while Trans first film may be stronger both thematically and stylistically, it's hard to deny the bewitching qualities of his latest effort. It's a natural continuation of themes that have long been important to Tran, and here they congeal into something wholly entrancing.