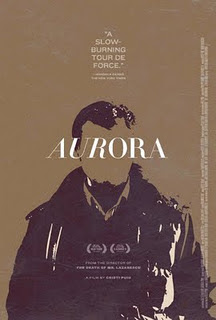 NOTE: This is a reprint of my original review, from June 25, 2011. An addendum has been added to reflect the DVD release.

Director Cristi Puiu's The Death of Mr. Lazarescu was the first feature film that heralded to the world that arrival of the so-called Romanian New Wave in 2005 (it didn't arrive on US shores until 2006).

The movement would continue with other filmmakers such as Cristian Mungiu (who delivered the movement's vanguard, 4 Months, 3 Weeks, and 2 Days) and Corneliu Porumboiu (12:08 East of Bucharest, Police, Adj.), but Puiu has the distinction of being the first (if you don't count Cătălin Mitulescu's 2004 Cannes winning short film, Trafic).

Now he has returned to the world stage with his latest film, Aurora, and has delivered yet another one of the movement's strongest works.

Naturally, a three hour long Romanian film composed with long takes, few edits, and minimal music will be a hard sell for a majority of the American public, but for those willing to challenge themselves, Aurora is a compelling and rewarding piece of cinema.

A fascinating study of the mind of a killer, Aurora is anything but what you would expect of a film of its subject matter. It centers around Viorel (played by Puiu himself), a 42 year old divorced father of two who one day sets out to buy a gun. We don't know why, or what he plans on doing with it, but Puiu follows Viorel with a growing sense of tension. And even when we finally discover what he plans on doing with his gun, we still do not understand his motives. For nearly three hours we follow Viorel on his grim quest with a voyeuristic intensity that is so intimate its almost uncomfortable. Puiu places his camera in such a way as to place the audience into the film as a spectator, following Viorel as he follows others through the streets of Bucharest. We are in his shoes, a voyeur, a participant, and therein lies much of the thematic heft of Aurora.

“There is no such thing as a murderer, only people who kill,” Puiu says. The essential conceit of the film is that killers are people too, and Puiu is enamored with the idea of the killer as a normal person. On the surface, Viorel is just like any other man, who also happens to be capable of something that, to the majority of people, is considered completely heinous and unacceptable in civilized society. Puiu treats the act of killing as a mundane occurrence, completely normal in its existence in Viorel's life. Here, it is a fact of life, as commonplace as pouring a glass of orange juice.

By the time we are shown Viorel's confession, Aurora takes on an almost satirical view of not only the justice system, but how we as the audience view his crimes. The almost flippant nonchalance with which the police treat Viorel's confession (and his crimes themselves), are an indictment of just how jaded we have become to acts of violence. One thing even many fans of Romanian films often miss about them is just how funny they are, and Aurora is no exception, despite its deeply serious subject matter. Puiu displays a wry sense of humor that is often so dry as to be nearly imperceptible, but its definitely there.  The Romanians use satire as a scalpel, a razor sharp instrument of social commentary that cuts deep.

Aurora is a measured, expertly crafted exercise in ambiguity, where killing has no reason and no explanation. Puiu has set out to make a film that avoids any kind of pat explanations for that which has no explanation. Killing is a senseless act, and Puiu never tries to explain it away or rationalize it. It simply exists, without thought, without reason, as an inescapable part of everyday life. Without glamorizing or trivializing, Aurora is an engrossing, naturalistic portrait of violence that is the antithesis to any Hollywood study of the same subject. It never once feels like a three hour long movie - it simply exists as an unnerving, and wholly lived in, moment in time. It's an academic think-piece disguised as a thriller, whose lingering questions hold up an unnerving mirror to our own propensity for violence. In a world where violence is so commonplace, where killing is without reason or remorse, when and where does it end? In Puiu's world, rational thought cannot explain away that which by its very nature is senseless, and Aurora wonders just how well we can ever truly know another person, or what that person is capable of. In a species as irrational as ours, anything is possible. And that is the film's most disturbing idea of all.

DVD addendum: The DVD release of Aurora is predictably bare-bones considering its relatively low-profile, even among art house audiences and cinephiles. It does, however, include Puiu's short film, Cigarettes and Coffee, winner of the 2004 Golden Bear at the Berlin Film Festival. While the film quality looks like something off of an old VHS, the film itself is surprisingly riveting, especially given its subject matter. It's an extended dialogue scene between two men at a cafe that slowly reveals their relationship. The older man has recently been laid off and is looking for a job. He needs two more years of work in order to qualify for retirement benefits. The younger man is going to help him get a job, if not necessarily the job he wants, and has asked the older man for specific items to use to bribe the official who will get him the job he needs.

It's a short, simple work, but it's wonderfully acted. The performances of both men feel remarkably lived in, and the history between the two is palpable as Puiu slowly peels back the layers. It may not seem like much on the surface, but that's one of the great things about Romanian cinema - nothing is on the surface.

The DVD also includes a director's statement by Puiu himself, detailing his intentions with the film. While it doesn't necessarily reveal anything that hasn't already been published elsewhere, but Cinema Guild has done a lovely job of designing and presenting the package. It may be as sparse as the film itself, but the film still sparkles nevertheless.